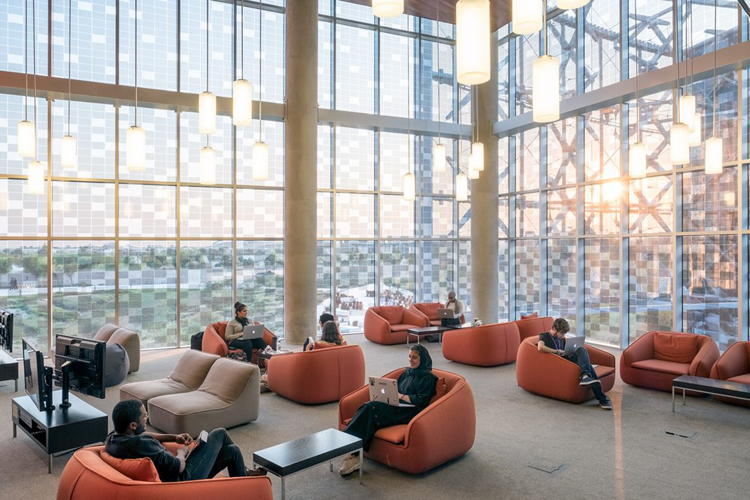 Hassan Al-Jahani of Qatar is getting an American-style education without having to leave his country.

“Studying at a high-caliber university like Northwestern is a badge of honor I wear proudly,” said Al-Jahani, who is majoring in communications from that school’s international branch campus in Qatar’s Education City.

Northwestern University, based in Evanston, Illinois, is one of six U.S. universities clustered in an “education hub” just outside of Doha.

Of the 250 international branch campuses operating today, more than one-third of them are American, according to the Association of International Educators.

Everette Dennis, the dean of Northwestern in Qatar, said the university’s Qatar branch campus includes students from more than 40 countries but emphasizes American values. “The school is devoted to the values of freedom of expression and independent media,” Dennis said, but the style of education also is “deeply rooted locally and connected to the local culture.”

Kevin Kinser, an international education expert at Pennsylvania State University, said the biggest appeal for countries to host an American university branch campus is the opportunity for their citizens to get a top-quality American education at home, where they stay and use their schooling to advance their own countries.

George Mason University in Korea is part of an education hub called Incheon Global Campus. The schools of the campus are located next to Korea’s high-tech manufacturing region, whose businesses require a steady stream of highly educated human capital.

“Ninety percent of our students are mainly of Korean heritage, who have lived overseas and want the opportunity to conduct their studies in English, receive a world-class American degree at an affordable rate and be close to family,” said Gbemisola Disu, an official with the university.

Korean student Madeline Joung said her experience at George Mason Korea “has given me more opportunities to challenge myself” and that the U.S. style of instruction “made me look at education not as a goal but a process.”

Benefit for the U.S. too

On an international branch campus, American faculty members can find greater opportunities to collaborate with their international counterparts on research projects, especially at an education hub such as Incheon or Doha.

Brooke Finnicum of Delaware, a recent graduate of George Mason University Korea, said that studying abroad “helped me become more independent, confident, and allowed me to gain a global mindset.”

Her time on the Incheon campus prompted her to further her Korean cultural studies, and she’ll now contribute to a growing U.S. cadre of international experts. “I have become incredibly passionate about a culture and language that is completely different from my own,” she said.