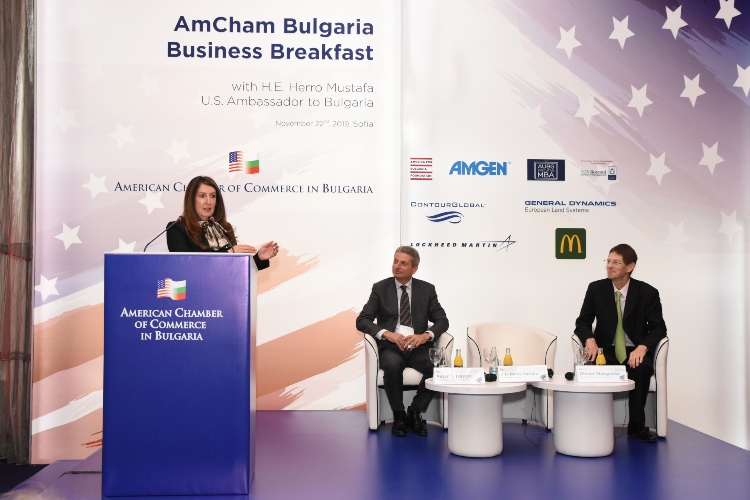 It is a pleasure to be here today.  I appreciate your warm welcome.  I have been in Bulgaria for a little over a month, but I already feel welcomed here.  It has been a busy time, and also very rewarding.  I have met with numerous counterparts in government and civil society, and have enjoyed getting to know Bulgarian culture.  If my first weeks are any indication, this is going to be a very exciting time to serve as U.S. Ambassador to Bulgaria.

I want to congratulate AmCham for a very successful year.  We know that Bulgaria and the United States grow stronger together through business-to-business connections.  President Olivier Marquette and Executive Director Petar Ivanov – your vision and leadership, combined with the AmCham Board, are a role model for other AmChams around the world.

This is not an end.  With work and determination, we can ensure that this is only the beginning.  A combination of American capital and know-how with Bulgaria’s dynamic, highly-skilled, energetic workforce holds great promise for creating value on both sides of the Atlantic.

I am also proud that American companies set the standard for corporate social responsibility and giving back to their communities. U.S. companies in Bulgaria have invested millions of dollars in environmental conservation, education, and healthcare.

I know that you are all interested in what will happen in Washington next Monday, when President Trump welcomes Prime Minister Borissov to the White House.  Obviously, I need to let our leaders speak for themselves, but I feel confident that it will be a positive and productive visit.  The meeting is an opportunity to not only celebrate the strength of our strategic relations but also to move them to the next level.  I expect President Trump and Prime Minister Borissov will discuss our robust security cooperation, our mutual trade and investment, support for rule of law, and Bulgaria’s energy security.

We need to make the most of this stage in the U.S.-Bulgaria partnership and work together toward achievable goals.  With the combined vision and leadership of the private sector and government, we can prepare the rising generation of workers for tomorrow’s jobs and build stronger communities and families here in Bulgaria.  We can build economic links across the Atlantic, benefiting Americans and Bulgarians alike.

What should we strive to achieve as we work together to build a more stable and prosperous Bulgaria?  Please allow me to take a moment to outline my vision for the coming three years.

First, let’s build a Bulgaria that is a true energy hub.  Bulgaria has the potential to be a robust gas and electricity market for the region.  We should support Bulgaria’s efforts toward energy independence and sustainability, so that the country is no longer dependent on one supplier of energy.  The United States will work with our Bulgarian friends and partners, as well as with other countries in the region, to open a path for LNG to come to the Balkans.  Increased competition will lower costs for the Bulgarian companies and consumers.  The U.S. Will also send a team of technical experts to explore options for developing Bulgaria’s nuclear energy sector, including visits to Belene and Kozloduy.

Second, in three years Bulgaria should be on a path to further integration in leading economic institutions, including OECD and the Euro Zone. Bulgaria is a leader in Balkan integration, but Bulgaria has great potential to be a vital, contributing member of critical regional and global institutions.

Third, Bulgaria should make significant progress on rule of law and combating corruption.  In three years, Bulgaria can be the most attractive destination in the region for American companies.  We measure Bulgaria’s progress through specific indicators.  Currently, the World Bank’s “Doing Business” report ranks Bulgaria at 59.  Transparency International ranks Bulgaria at 77.  Both of these rankings are too low.  Let’s aim to help Bulgaria significantly improve both rankings.

Now is the time.  A constellation of factors are aligning: political will, a nation ready to move to see a qualitative increase in living standards, a region clamoring for Bulgarian leadership, and a stable macroeconomic picture with plenty of room to grow. Unlocking the full potential of the U.S.-Bulgarian economic relationship requires a fertile ground.  It requires an improvement in the investment climate, in regulatory predictability, in tender procedures, and in the reliability of the judicial system.  It requires a free, dynamic, and vibrant media that closely watches over all of these processes, forcing all actors – private and governmental – to play fairly and responsibly.  The better these conditions are, the better Bulgaria’s rankings will be – and the more opportunities you will have to increase your operations, creating profit and value, and strengthening our Transatlantic economic bonds. This will also create conditions for Bulgarians who have sought opportunities outside the country to bring their knowledge, experience, and capital back to promote faster growth at home.

These improvements require frank and open discussions about what we have gotten right and where we need to see improvement.  These discussions will need your input, as you have your boots in the ground and can best identify the existing gaps and suggest ways of improving them.  I will count on you and am looking forward to this dialogue.

For my part, I plan to focus the work of the Embassy on the priorities that I like to categorize as the three Cs: Connectivity, Collaboration, and Corruption.

First on Connectivity: I will work to deepen the bonds between Bulgaria and the West on all fronts to include economic, military, commercial, cultural, and people-to-people ties. This extends to civil society including women and youth as well as disadvantaged minority communities. This priority is not only about deepening bonds but also about respect.  Respect for each other’s cultures and people means greater understanding and great understanding usually translates to better communication and cooperation.

Bulgaria has been a strong NATO Ally for 15 years. The Bulgarian government’s selection of the F-16 multi-role fighter airplane will bring our countries closer together as Lockheed Martin will be investing in Bulgaria and Bulgarians as part of this agreement.  But this is only the beginning of Bulgaria’s pathway toward military modernization and further NATO integration.  The government should maintain it’s level of defense spending to at least 2 percent of GDP going forward.  We also need to focus more on the Black Sea region and naval capacity.

Second on Collaboration: I would like to work with all my colleagues across the region to promote regional collaboration.  Bulgaria has been a positive player in the region and a leader in advancing the European integration of the Western Balkans.  For example, it has been a strategic partner in advancing border security and migration controls on the frontlines of the EU’s external border as well as information sharing within the Balkans.  In demonstration of its leadership, Bulgaria agreed to co-host a regional forum focused on countering violent extremism in the Balkans next month in Sofia.

Energy security is also a critical part of national security. Bulgaria imports most of its energy from Russia, including all of its nuclear fuel and nearly all of its natural gas. I will work to support Bulgaria’s efforts to diversify its energy supply, to include the Greece-Bulgaria interconnector gas pipeline (IGB) and Bulgaria’s participation in Greece’s planned Alexandroupolis Floating Storage and Regasification Unit.  Just this month, I travelled with my Greek and Azerbaijani counterparts, with the Energy Minister, the Prime Minister and with the relevant private-sector executives to the Haskovo District to inspect construction progress on the IGB. But let’s not stop there. We should continue to build links with neighboring countries, such as the vertical route to Romania, Hungary and Austria and horizontal to Serbia and maybe North Macedonia.  We must also ensure a fair, non-discriminatory, and transparent market – a key to diversification.

Third on Corruption: I will work with Bulgarian government and civil society on fighting corruption and advancing rule of law, which is key to Bulgaria’s continued growth.  Building a strong democracy requires constant work to defend the rule of law and media freedom.  Only when all voices can be heard, and when citizens have faith in their government and its institutions, can a country and an economy reach their full potential.

Thank you for inviting me here today, and for giving me the opportunity to discuss my vision as U.S. Ambassador to Bulgaria.  I am excited and hopeful about the direction of the U.S.-Bulgaria partnership broadly.  And I am confident that our two countries will achieve a great deal in the coming years.  We can only be successful if governments, companies, and individuals work together to achieve common goals.  Because we are stronger together. 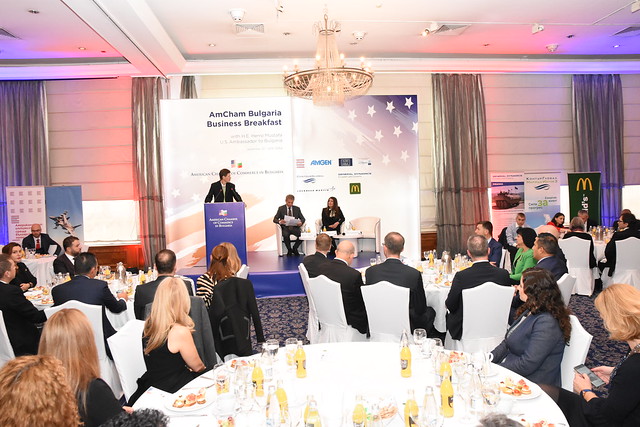