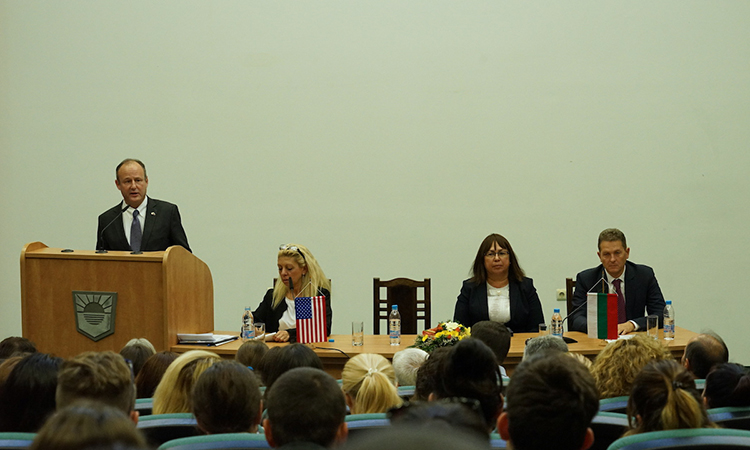 Thank you all very much for the opportunity to speak here today.  I would like to thank President Petko Chobanov, though he is unable to be here, Rector Galya Hristozova, and especially Vice Rector Milen Baltov, for organizing my visit here today.

These types of partnerships yield positive results for our countries, as students and faculty from both the United States and Bulgaria learn from each other and cooperate in solving some of our societies’ toughest problems.  They also create lasting bonds between our countries that only grow stronger over time.

Bulgarians should be proud of this university, and what it represents.  It was founded not long after Bulgaria’s establishment of democracy in 1991 as an institution dedicated to cultivating ideas and promoting understanding and optimism.  Those values never go out of fashion, and they are the underpinnings of what democracies like Bulgaria offer the world in the 21st century.

Every generation feels like it is living in unique times, and in many ways, they are right.  But young people today face a mix of immense hope coupled with profound uncertainty.  It seems like the world changes at an ever-increasing speed, especially in how we communicate and how we do business.
But those values I just mentioned – and others like tolerance, freedom and the rule-of-law, are, in the words of our new Assistant Secretary for European Affairs Wess Mitchell, “the glue of a common civilization, a civilization that is united by bonds of memory, culture and shared sacrifice.”  That is what I’d like to talk about with you today.

We in America do not own these values, nor have we perfected them, but we are proud to support them at home and around the world.  And we stand with our allies who believe in the same values, and who are committed to walking on the bright side of history.

In 1961, as the Cold War got even colder, and some countries around the world faced violent upheaval from radical forces, President John F. Kennedy explained the American philosophy in defending our allies.  “We shall not always expect to find them supporting our view,” President Kennedy said.  “But we shall always hope to find them strongly supporting their own freedom.”

We are proud today to stand arm-in-arm with Bulgaria, our close ally and partner for so many years.  We are proud of the progress that Bulgaria has made in areas like human rights, democratic development and economic progress.  And, with Bulgaria’s European Council presidency next year, we admire your commitment to a peaceful, prosperous EU – a Europe whole, free, and at peace.
Bulgaria’s growing role in the European Union is just one reason that I am optimistic about Bulgaria’s future.  I first came here in 1992, a time that your professors and parents will remember as being full of hope and promise for a young, democratic Bulgaria.  I realize that the intervening years have not all been rosy, and I’ve heard people talk about a lack of optimism.  I understand those frustrations, but I also believe that there are reasons to be optimistic in Bulgaria today.  Those reasons are all around us in the inspiring people who make Bulgaria great.

A few months ago, we started a public relations effort to showcase some of Bulgaria’s everyday leaders through a campaign called “The Power is in You.”  Perhaps you’ve seen some of our videos on the internet or on television.

In the videos, we tell the stories of ordinary Bulgarians who are choosing to invest in their own country, maybe by starting a business or teaching in a struggling school, or breaking boundaries that others thought impossible.

I’d like to tell you about a few of these people – people whose stories inspire us and show us that Bulgaria’s best days are ahead.

Two of those people are Daniela and Ruzhdi, both of whom suffered terrible accidents and were paralyzed at age 17.  But instead of giving up, or even leaving Bulgaria, they gathered the strength to become champion Paralympic athletes, winning Olympic medals and setting world records for Bulgaria.  “I’ve always been an optimist,” Daniela told us.  “One should overcome their own obstacles in order to move forward,” she said.

Another Bulgarian who inspires me is a schoolteacher named Dani.  She studied in England and could have stayed there, but she decided to return to Bulgaria to teach English.  She works in a school in Samokov and has never regretted her decision to return.  As she told us, “I was sick and tired of hearing that there was no point in coming back and working here.  I have always wanted to come back.  That’s how I felt,” she said.

And then there is Rosi, one of Bulgaria’s first female airline pilots.  Rosi told us she feels a rush of adrenaline every time she flies into the clouds, knowing that she can go anywhere she wants, that nothing is holding her back.  But she is always happiest when she returns home, to Sofia, because she is excited about what is happening here, in her own country.

There are many different stories that we are telling in this campaign, but the one thing that unites all of these people is that they all represent the Bulgarian spirit – they believe in Bulgaria and they are committed to its future.  I share this belief and commitment.  And, I share their optimism.
Besides my optimism about Bulgaria’s future, I am proud of the deep bonds between our two countries – a partnership that goes back centuries.  America has cherished its relationship with Bulgaria for well over a century.

In fact, in 1860, the first American school was founded in Bulgaria by Dr. James Clarke.  Over the next 60 years, the school educated thousands of Bulgarian children, many of whom went on to do great things for Bulgaria.

Following World War II, however, the school’s board decided to close the school under unrelenting pressure from the new Communist regime.  That led to an outcry, both from Bulgarian alumni of the school, as well as Americans who supported the school from afar.  It took decades of work, but the school eventually returned to its historic campus in Sofia, thanks to donations from Americans, as well as a large gift from the Bulgarian Parliament.  That school – the American College of Sofia – is still open today, and is a shining example of the ties between our countries.

That’s just one example of how Bulgarians and Americans have cooperated over more than 150 years.  As a nation of immigrants, America is home to hundreds of thousands of people who cherish their Bulgarian roots, living in cities like Chicago and Miami, and in states such as Indiana and Texas.  Because of these strong ties, we have never lost faith in and commitment to Bulgaria’s future, even during the difficult days of two world wars and then the Cold War.

Those bonds, forged during difficult times for both of our countries, continue to shape how we interact today.

American businesses invest more every year in Bulgaria, and together with the American Chamber of Commerce they have been a tremendous force for progress in Bulgaria.  American companies operating in Bulgaria lead the way as good neighbors and corporate citizens, donating millions of dollars to charitable causes, funding professional development programs throughout the country and reinvesting in the country and people who have been so welcoming to them.

As NATO allies, we are committed to stand united against security threats and challenges before our countries.  We have cooperated closely to advance our shared counterterrorism priorities, to keep our borders secure, and to stop Russia’s aggressive and destabilizing behavior in the region.  In 2014, the EU, the United States and others stood together against Russia’s illegal annexation of Crimea by placing economic sanctions on Russia.

Some argue that the sanctions are seriously hurting Bulgaria’s economy, but export statistics tell a different story.  Sanctions against Russia have reduced Bulgaria’s global exports by only 0.2 percent, while Russia’s countersanctions against certain Bulgarian agricultural products have reduced those exports by just one percent, or 0.01 percent of Bulgaria’s gross domestic product.
This is a testament to Bulgaria’s successful efforts to diversify its economy and its exports, especially to other countries in the European Union, especially Germany.

Another key aspect of a strong economy is a diverse energy supply.  The U.S. government stands with Bulgaria as it works to find more diverse sources of energy.  This is especially important for Bulgaria’s national security, as some countries seem intent on using energy sources as a political lever to coerce others or to exact higher prices.

I hope you will see – as I do – that Bulgaria has made tremendous progress over the past two decades.  You should be proud of what your parents’ generation achieved and look forward to building on the foundation of their success. And, soon it will be your turn to lead.  You will have to choose how you will shape Bulgaria’s future.  What choices will you make?

When we speak about knowledge and understanding, will you be strong supporters of Bulgaria’s education system, ensuring that every Bulgarian who wants to attend university has that chance, regardless of their name or their background?

Will you demand that kids in school learn about all of Bulgaria’s history – even the horrors of mass executions, forced labor camps and repressions during the Communist years?
Will you encourage free thought and expression for everyone, even when you disagree with the ideas being expressed by some?

Will you support a strong, independent media in Bulgaria that is unafraid to ask uncomfortable questions of those in comfortable positions?

Are you tolerant?  The world is full of people whose cultures and beliefs are different.  But that doesn’t mean anyone’s beliefs are superior.

Tolerance also includes protecting religious minorities.  In all the places I’ve lived and visited over my life, I’ve found that the strongest, most resilient communities are those that embrace diversity and celebrate differences.  Bulgaria has tremendous diversity that it should celebrate, and you should never fear others so much that you close your hearts to them.

I have just posed many questions to you, some of which are difficult and require a lot of reflection and introspection.  I know this because we, as Americans, continue to ask ourselves these same questions, and we often disagree and struggle with the answers.

They require a belief that citizens of a democracy can and must work together to improve life for everyone.  The very first sentence of the U.S. Constitution contains the phrase, “in order to form a more perfect union.”  This shows that America’s Founding Fathers knew that they were simply beginning a journey.  They did not reach their goals and aspirations overnight, and their struggle has not always been easy.

Look around you – you are the future leaders of Bulgaria.  And as you go out into the world in the coming years, you will be presented with choices about how you want to live and about what you will choose to believe in.

Make those choices with optimism in your heart and democracy on your mind.  If you do that, I promise you that Bulgaria’s future will be bright and prosperous for you and your children.

Thank you very much.