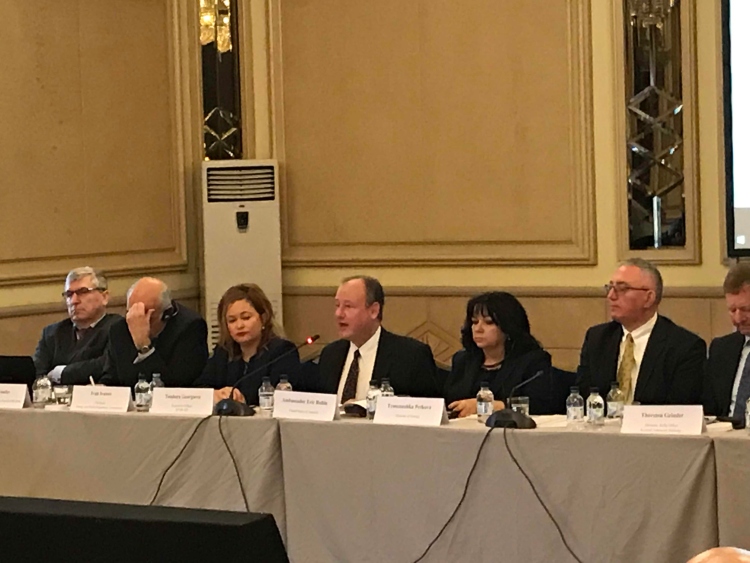 As Prepared for Delivery

Thank you very much for the opportunity to speak here today.  I am very happy to see some preeminent energy experts at this event.  I would especially like to thank Ognian Shentov of CSD and Thorsten Geissler of the Konrad Adenauer Foundation for organizing this roundtable.  Energy security is a critical issue for Europe, for Southeast Europe, and for Bulgaria.

Energy security is essential to national security.  This is something that we and our European partners agree on.  In 2009, we established the EU-U.S. Energy Council.  One of the key goals of this body is to promote transparent, open, and secure energy markets.  This past July, EU High Representative Federica Mogherini and Secretary of State Mike Pompeo co-chaired the Council’s eighth meeting.  Modernization and development of energy infrastructure, along with diversification of energy sources for enhancing energy security, were at the top of the agenda.

Speaking in Prague earlier this month, Secretary of Energy Rick Perry called energy security “a vital component of national security.”  “Independence,” he pointed out, “can be threatened in other ways besides outright invasion.”  “Energy Security,” Secretary Perry explained, “requires energy diversity… a diversity of supply… of countries providing that supply… and of routes to deliver that supply.”

Diversification of energy supplies – by county of origin, path of delivery, and fuel type (including renewables) – helps to ensure that energy is available at the best price to all and that no supplier can use energy to economically or politically coerce consumers.  Unfortunately, we are quite a ways off from achieving that goal.

In 2017, 38.5% of total European gas imports came from Russia, and today, 13 European countries continue to rely on Russian gas for 75% or more of their annual needs.  Bulgaria is one of those countries.

Nord Stream 2 and the second line of TurkStream would do nothing to diminish Europe’s reliance on Russian gas, and that reliance could grow as EU gas production declines.  The projects also pose real political challenges.  As Secretary Perry said, these “are not commercial projects as their proponents proclaim.  They are naked political gambits aimed at driving a wedge between Europeans.  They would increase Russia’s leverage over Europe’s foreign policy” and increase “Europe’s vulnerability to a supply disruption…  While we do not oppose Russia supplying natural gas to Europe, we believe Russian producers must abide by the same rules as other suppliers.”

As Secretary of State Mike Pompeo said in Washington this month, “We do not want our European friends to fall prey to the kind of political and economic manipulation Russia has attempted in Ukraine since it cast off its Soviet shackles.”

Let us be clear:  Our position is not about our commercial interests.  As President Trump stated at the Three Seas Summit in Warsaw last year, “The United States will never use energy to coerce your nations, and we cannot allow others to do so.”

“The good news,” as Secretary Perry pointed out, is that “the choice you face is not Russian supply versus no supply.”

This point certainly applies to Bulgaria.  I am glad to see among today’s speakers Teodora Georgieva, the head of the project gas Interconnector Greece-Bulgaria.  The IGB would go a long way toward diversifying Bulgaria’s sources of natural gas.  Ms. Georgieva has worked tirelessly to make this project a reality.

Energy security is national security.  The United States supports Bulgaria on its path to an energy framework that is more modern, more secure, and more independent.  The two largest U.S. investors in this country, AES and ContourGlobal, played a key role in strengthening Bulgaria’s energy infrastructure prior to its accession to the European Union.

Today, Westinghouse is offering for the Kozloduy power plant a cost-competitive nuclear fuel supply that has been proven safe in commercial use in Ukraine.  Bulgaria should take this opportunity to qualify and license fuel from more than one source, boosting its energy independence, and bringing the economic benefits of competition to Kozloduy.