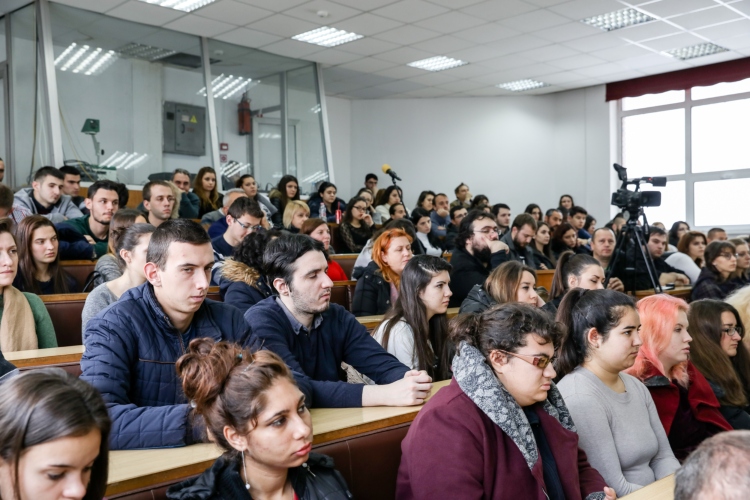 Thank you all very much for the opportunity to speak here today.  I would especially like to thank Rector Hristo Bondzholov and his team for organizing my visit today.

I am honored to be here at the University of Veliko Tarnovo.  When the university first opened in 1963, there were just 25 professors and 340 students, and they could study only four subjects: Bulgarian philology, Russian philology, history and fine arts.  But, like Bulgaria, this university has matured and grown over the past 55 years.  Now, students can study dozens of subjects in nine faculties, including law, economics and education.

Bulgarians should be proud of this university and what it represents.  It is the heir to the famous Tarnovo Literary School, which was founded more than 600 years ago, and which marked Veliko Tarnovo as a center of learning.  Like any university, it began as a way to spread knowledge and understanding.  Now, the learning here contributes to ideas that have become the foundation of our shared democratic values.  President Trump summarized those values when he said:

“… Above all, we value the dignity of every human life, protect the rights of every person, and share the hope of every soul to live in freedom. That is who we are. Those are the priceless ties that bind us together as nations, as allies, and as a civilization.”

These same values have been articulated many ways at many times in the past.  I often think of our late, great President Franklin Roosevelt, who laid the groundwork for our system of values in his 1941 “Four Freedoms” speech before our Congress.  He cited these four essential freedoms – freedom of speech, freedom of worship, freedom from want, and freedom from fear – as the goals of a new postwar world based on liberty, prosperity and peaceful coexistence.  Sadly, it took many decades for that dream to be realized.  But it was realized in much of the world.  Hundreds of millions of people achieved the opportunity to live their lives in peace, pursue a better future for their children, and decide for themselves how they wanted to be governed, and by whom.

At the heart of this vision was the idea of government by the consent of the governed.  That in a democracy, citizens will decide who holds power and how that power is exercised.  That the rule of law will apply to all equally, including those in positions of power.  That nations would also follow these principles, working out their differences through the United Nations system that President Roosevelt was so instrumental in advocating, but sadly never lived to see.

Then, the end of the Cold War brought a new chance to reshape the global system.  The Transatlantic vision was reborn, not as a concept of confrontation but of peace and prosperity and freedom.  The idea of one Transatlantic space, from Vancouver to Vladivostok, remains as important and valid today as it was in 1989.  We are a long way from achieving its full promise, to be sure.  There is much work to be done, and there are many painful disagreements to resolve.  But that must be our goal: no new dividing lines, no new spheres of influence or confrontation.

Let me underline that the European project remains as central to American foreign policy as it was from the earliest days of the post-war period.  From the very beginning, we put our weight behind the vision and dreams of Monnet, de Gasperi, Schuman, Adenauer, Spaak, and Churchill.  And so many others who believed that the horrors of war could only be prevented in the future by ensuring that Europe came together.  And that that vision of Europe was open and welcoming and closely tied to allies and partners across the globe who shared the values that underpinned it.  We – the United States – are not and will not be members of the European Union, but its success is critical to our security, prosperity, and freedom.  We believe with all our hearts in the fundamental idea of One Europe, Whole, Free, and at Peace.

Because of our belief in this vision for Europe, we applaud all the effort that Bulgaria has put into its EU membership.  Earlier this year, Bulgaria became the center of Europe during its successful EU Presidency.  We congratulate Bulgaria for its leadership during its presidency in discussing significant issues that affect all of us, including its stated priorities of regional security, the future of the Western Balkans, and the Digital Single Market.

Key to the success of this vision of a Europe whole, free, and at peace is partnership.  I am proud of the deep bonds between our two countries – a partnership that goes back centuries.  In fact, Bulgaria is the home of one of the earliest American educational institutions outside of the United States.  In 1860, Dr. James Clarke founded a school for boys in Plovdiv, then shortly thereafter a school for girls in Stara Zagora.  In time, those two schools became the American College, which over a 60-year period educated thousands of Bulgarian children, many of whom went on to do great things for Bulgaria.

Following World War II, however, the school’s board decided to close the school under unrelenting pressure from the Communist regime.  That led to an outcry, both from Bulgarian alumni of the school, as well as Americans who supported the school.  It took decades of work, but the school eventually returned to its historic campus in Sofia, thanks to donations from Americans, as well as a large gift from the Bulgarian Parliament.  That school – the American College of Sofia – is still open today, and is a shining example of the ties between our countries.

That’s just one example, one example of many, of how Bulgarians and Americans have cooperated over more than 150 years.  As a nation of immigrants, America is home to hundreds of thousands of people who cherish their Bulgarian roots, living in cities like Chicago and Miami, and in states such as Indiana and Texas.  Because of these strong ties, we have never lost faith in and commitment to Bulgaria’s future, even during the difficult days of two world wars and then the Cold War.  Those bonds, forged during difficult times for both of our countries, continue to shape how we interact today.

American businesses invest more every year in Bulgaria, and together with the American Chamber of Commerce they have been a tremendous force for progress in Bulgaria.  American companies operating in Bulgaria lead the way as good neighbors and corporate citizens, donating millions of dollars to charitable causes, funding professional development programs throughout the country, and reinvesting in the country and people who have been so welcoming to them.

Nongovernmental organizations – such as the America for Bulgaria Foundation – devote tens of millions of dollars every year to developing Bulgaria’s human capital.  These organizations modernize Bulgaria’s education sector, promote justice reform, spur private sector development, and engage in a variety of ways to contribute to Bulgaria’s ongoing success.

The United States also supports thousands of exchange opportunities every year for students, educators, and a variety of professionals, sending Bulgarians to the United States and Americans to Bulgaria to share their experiences and perspectives with new colleagues and friends.  Every year, about 5,000 Bulgarian students like yourselves spend their summer working and traveling in America.  I encourage you to visit the Embassy’s website to learn more about the Summer Work & Travel Program.

These exchanges will pay enormous dividends in the future as our citizens partner together to address the many global and regional challenges that require international collaboration and communication.

As NATO members, we defend each other from outside threats, and we do so because we share the same belief in democratic values and institutions.  We believe in the power of liberty, economic opportunity, the rule of law and the importance of a free and independent press.  We are – in the words of Assistant Secretary of State Wess Mitchell – “a community of democratic nations united by history, culture and shared sacrifice.”

Every generation feels like it is living in unique times, but I agree with those of you who feel that these times are more unique than most.  Among our many challenges is a cacophony of voices attempting to argue that democracy is an ineffective method of governance, that Europe has no future, that diversity is a weakness, and that free expression is a threat to society.  My plea to you today is that you recognize these dangerous and destructive messages for what they are: attempts to sabotage Bulgaria’s European future.

Soon it will be your turn to lead this country, and it is important for you to choose now how you will shape Bulgaria’s future.  Liberty, tolerance, and respect require commitment, courage, and hard work.  They require a belief that citizens of a democracy can and must work together to improve life for everyone.

As you go out into the world in the coming years, you will be presented with choices about how you want to live and about what you will choose to believe in.  Make those choices with optimism in your heart and democracy on your mind.  If you do that, I promise you that Bulgaria’s future will be bright and prosperous for you and your children.

Thank you very much.