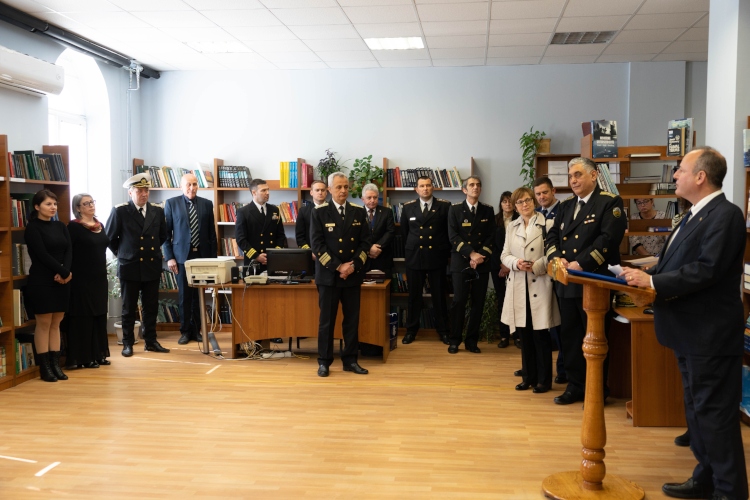 Good afternoon, everyone – welcome to this dedication ceremony in honor of U.S. Navy Rear Admiral Alfred Thayer Mahan.  Thank you very much, Admiral Mednikarov, for this gracious gesture and invitation.  It is a great privilege for me to participate in this ceremony honoring one of the greatest U.S. naval historians, and also to be welcomed at one of the most prestigious technical institutions in Bulgaria.

Nikola Vaptsarov Naval Academy is a premiere maritime training center for both Naval and merchant marine officers and is highly regarded and respected for its professionalism, curriculum, and maritime expertise.  Most notable are your Academy’s state-of-the-art simulators – thank you for allowing me to view them – which provide invaluable training to current and future maritime operators and officers.  These simulators are so widely respected, that U.S. Command Sixth Fleet has requested the next Eurasia Partnership Ship Handling exercise to be conducted here in conjunction with five other Black Sea Naval partners.

Rear Admiral Mahan graduated from the U.S. Naval Academy in 1859 and served honorably until his retirement as a Rear Admiral in 1896.  Notwithstanding his superior Naval service, he is more highly regarded as an historian.  His most notable works are the booksThe Influence of Sea Power Upon History and The Influence of Sea Power Upon the French Revolution and Empire.  His knowledge and expertise are still respected and taught to this day, and now his name and legacy will be an honored part of the Nikola Vaptsarov Naval Academy library.

We are very proud and appreciative of the close cooperation and integration between the U.S. Naval Academy and Nikola Vaptsarov Naval Academy.  Bulgarian mid-shipmen and faculty participate and contribute to numerous maritime educational ventures; including, the biannual European Naval Academies Conference, the Cultural Exchange and Language Proficiency Program for prospective U.S.  R  O  T  C  Naval Officers, and the Naval Academy Foreign Affairs Conference which is hosted by the U.S. Naval Academy.  Additionally, Bulgarian students have embarked on U.S. Naval vessels for training in joint military seamanship exercises, further solidifying our ever-expanding partnership.

As an example of the close cooperation between our Academies, I would like to recognize Bulgarian mid-shipman Nikoleta Gerogieva, who is currently enrolled at the U.S. Naval Academy, and Lieutenant Junior Grade Seyko Seykov and Ensign Todor Stoev, previous graduates of the U.S. Naval Academy.  Lieutenant Junior Grade Seykov, and on behalf of Ensign Stoev, his commanding officer Major Ivanov, please come forward so that I can present you with an official U.S. Embassy Sofia coin in recognition of your accomplishments.

Finally, as a token of our appreciation and to memorialize this historic day in honor of Rear Admiral Mahan, I would like to present this U.S. Naval History to the Nikola Vaptsarov Naval Academy Library as a symbol of the friendship and partnership between our Navies and countries.