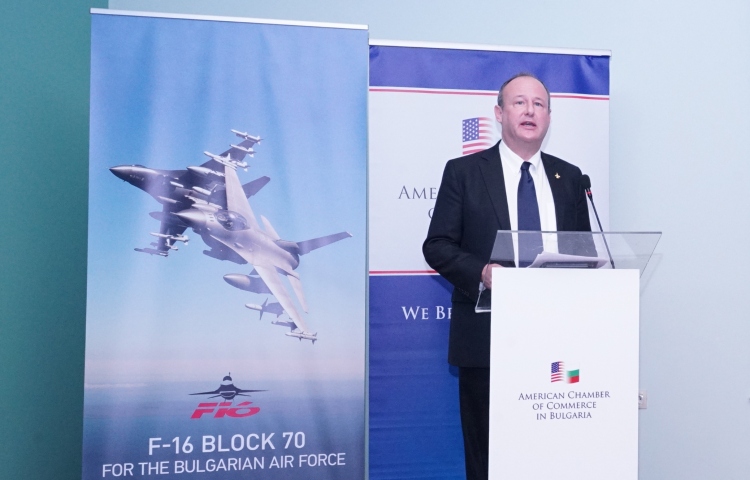 I want to first say, “thank you” to the American Chamber of Commerce for hosting this event and for welcoming me to this beautiful hotel, a state-of-the-art, modern structure built on such a historically-significant site.  Such a setting is a great symbol of Bulgaria’s rich history and great strides since the end of the Cold War and the nation’s ascension into the NATO Alliance and firm commitment to the security and prosperity of the Euro-Atlantic world.  I greatly appreciate this opportunity for me to highlight our strong bilateral partnership and our strong support for Bulgaria’s commitments to the NATO Alliance.  I am very happy to be here in Sofia at this time when the Bulgarian Government moves forward with its modernization projects, which include the procurement of new multirole fighter aircraft.

Security and defense cooperation is at the very core of our bilateral partnership with Bulgaria.  Today we face a dangerous, dynamic, and unpredictable security environment –from continued instability in the Middle East and associated migrant flows to pressures from state and non-state actors operating across a variety of domains that are challenging the rules-based, international system that has existed for the past 70 years.

It is clear that a robust security policy, backed by a fully resourced, well equipped, and capable military force, is of paramount importance to the United States, Bulgaria, and to the NATO Alliance, both today and into the future.  It is also equally clear that, in order to face these complex challenges, we must stand together.  Our defense partnership, which dates back to the early 1990s is a true testament to our commitment in facing these challenges together.  As part of this partnership and in support of the Alliance, the United States has demonstrated sincere commitments through investments in developing the capabilities of the Bulgarian Armed Forces, as well as in promoting the education of Bulgarian security force personnel.

Over the past 25 years, the United States Government has invested over $300 million dollars across various security assistance efforts to assist in training and equipping the Bulgarian Armed Forces.  In the same period, the Bulgarian Air Force has benefited from $50 million dollars of this assistance.  In the last 3 years alone, the United States has invested approximately $43 million dollars in construction projects at Graf Ignatievo Airbase and Novo Selo Training Area (NSTA) – two critically important U.S.-Bulgarian joint-use facilities.  These investments are in addition to the more than $50 million dollars the U.S. and Bulgaria invested to construct the Novo Selo Training Area.

These infrastructure upgrades are making Bulgaria a more attractive destination for the United States and numerous other NATO Allies and Partners to conduct training and exercises.  These construction projects have supported exercises such as THRACIAN EAGLE, in which the United States sends fighter squadrons to train together with the Bulgarian Air Force, providing an excellent opportunity for our air forces to learn from each other.  These ongoing investments are helping the U.S. and Bulgarian Armed Forces become stronger and more effective forces, capable of deploying alongside each other and other NATO forces when needed.

In addition to improving infrastructure at joint-use facilities, we are proud that, through our bilateral partnership, we have worked together to complete numerous humanitarian assistance projects throughout Bulgaria.  Since 2010, the United States has invested millions of dollars in approximately 60 assistance projects – building and renovating schools and other facilities across the country in support of Bulgaria’s social and economic development strategy.  Last fall, we opened the completely renovated Burgas Day Care Center for Youth with Disabilities.  Just last week, we opened a completely renovated Center for Specialized Educational Assistance that benefits 100 children with special needs.  And next week, I will have the pleasure of opening a primary school in Plovdiv, together with Deputy Mayor Stefan Stoyanov.  By investing in facilities such as these, we not only invest in the children of Bulgaria, but also in Bulgaria’s future and long-term prosperity.

Just as important as infrastructure upgrades is our commitment to offer professional military education opportunities to Bulgarian service-members and other government officials.  Since 1992, over 5,000 military officers, enlisted members, as well as civilian officials from the Ministries of Defense, Interior, and Foreign Affairs have benefited from U.S. training programs.  More than 820 Bulgarian military and civilians took part in training courses provided by the United States Air Force alone.  In the next year, approximately 60 Officers and Non-Commissioned Officers will also attend training courses in the United States.

From junior military service-members to the most senior, these education and training programs have promoted intellectual and operational interoperability, developing many professional ties that have been the cornerstone of our bilateral partnership.

In the face of an unpredictable and dynamic security environment, Bulgaria has remained a strong NATO Ally, acting as a force for stability and NATO integration in the Black Sea Region.  With the signing of the Friendship Agreement between Sofia and Skopje last year, a historic moment was reached.  This agreement is a concrete example of Bulgaria’s leadership role in the region.  Likewise, Bulgaria continues to demonstrate its commitment to peace and stability –both in Europe and abroad – through its participation in NATO, EU, and other coalition operations, including in Afghanistan, Kosovo, and Bosnia.

Speaking of leadership, Bulgaria also hosts one of eight NATO Force Integration Units located across Central and Eastern Europe, as well as the NATO Crisis Management and Disaster Response Center of Excellence.  These two entities are both supporting enhanced NATO capabilities, the former by bolstering collaboration between national forces and NATO High Readiness Forces, and the latter by providing recognized expertise and experience for the benefit of all the Alliance.

Bulgaria has also played a significant leadership role in multinational exercises, which further promote interoperability, peace, and stability in the Black Sea region.  In 2017, Bulgaria co-hosted exercise SABER GUARDIAN, which brought together nearly 25,000 forces from 22 Ally and partner nations.  Just last week, the Bulgarian Navy hosted the Bulgarian-Romanian maritime exercise “POSEIDON 2018,” which focused on NATO standards in joint mine warfare and included ships from Bulgaria, Romania, Greece, Germany, Spain and Turkey.  We look forward to continued leadership role that Bulgaria will play during the BLACK SEA AND BALKAN REGION EXERCISES next year.

I also want to applaud Bulgaria’s commitments with regard to NATO Burden Sharing, whereby Bulgaria has published a credible plan to reach 2% of GDP on defense spending by 2024.  We look forward to this plan’s implementation to address much-needed NATO capabilities.  We fully believe that, as part of this plan, the acquisition of new multirole fighter aircraft will provide a credible demonstration of Bulgaria’s commitment to Articles 3 and 5 of the Washington Treaty.

The United States is also committed to assisting our international partners to modernize their armed forces, including here, in Bulgaria.  The acquisition of a new multirole fighter will promote not only Bulgarian security but also regional security and the Alliance’s collective security.

Lockheed Martin is a well-known, respected, and proven American security and aerospace company, which is why the United States Government strongly supports their efforts in the multirole fighter competition here in Bulgaria.  Lockheed Martin’s new Block 70 F-16 is best suited for the Bulgarian Air Force because it is combat-proven, it provides instant interoperability with numerous NATO Allies – including Bulgaria’s neighbors: Greece, Romania, Turkey, Croatia, and Slovakia, and because this acquisition can further strengthen Bulgaria’s defense cooperation, engagements, and exercises with the United States and with other NATO Allies and Partners.  I look forward to hearing more about the extensive and impressive capabilities of this aircraft from Lockheed Martin’s representative, Mr. Jim Robinson.

Thank you all again for coming here today.  We look forward to our future bilateral cooperation, to Bulgaria’s continued commitments in support of NATO, and to Bulgaria’s defense modernization efforts, which will benefit Bulgaria, the NATO Alliance, and our partners in the Black Sea Region.