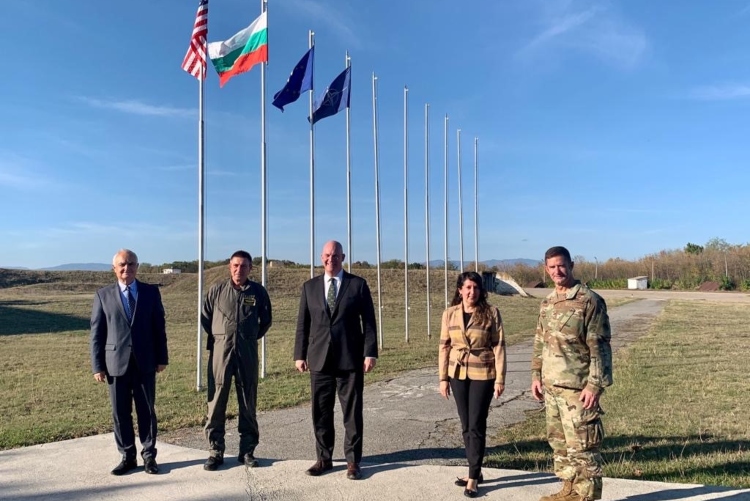 October, 20 – Today, the United States State Department’s Assistant Secretary for Political and Military Affairs R. Clarke Cooper visited Bulgaria’s Graf Ignatievo and Bezmer air bases, as well as the Novo Selo Training Area with U.S. Ambassador Herro Mustafa and Deputy Defense Minister Atanas Zapryanov. While at Graf Ignatievo, Assistant Secretary Cooper had the opportunity to observe U.S. airmen from the 31st Fighter Wing supporting the Bulgarian Air Force in the NATO enhanced Air Policing Mission, which keeps Bulgarian skies safe and enhances interoperability between NATO partners. During his visit, the Assistant Secretary stressed the importance of these joint-use facilities in enhancing NATO capabilities, and expressed the United States’ gratitude to Bulgaria for its commitment to the Alliance.

Assistant Secretary Cooper’s visit follows the successful visit of Defense Minister Krasimir Karakachanov with U.S. Defense Secretary Mark Esper on October 6 in Washington DC, during which they signed the Ten-Year Road Map for Defense Cooperation. The Road Map, which will serve as a guide for our countries as we work to further strengthen our alliance over the next ten years, begins a new chapter in our robust military cooperation. That partnership began in 2006 when the United States and Bulgaria signed a Defense Cooperation Agreement that provided for the joint use of several military bases and allowed the U.S. military to increase participation in training exercises in Bulgaria. The Assistant Secretary’s visit is an important step in the implementation of the Road Map, and in increasing NATO capabilities in the region.

In conjunction with Assistant Secretary Cooper’s visit, the United States Embassy in Bulgaria is pleased to announce that the United States Air Force intends to provide two decommissioned F-16 aircraft to the Bulgarian Air force, subject to the approval of the United States Congress. At the request of Bulgaria’s government, these two airframes will be transferred through the U.S. Department of Defense’s Excess Defense Articles (EDA) program for use as training aids and general familiarization tools for Bulgarian Air Force personnel.

The donation of these two fighters follows Bulgaria’s recent purchase of eight Block 70 F-16s from the U.S., which was an essential step toward modernizing Bulgaria’s military and brings unparalleled resources to bear on our joint security mission in the Black Sea region.

Bulgaria’s purchase of F-16s from the U.S. via the Foreign Military Sales system represents a deepening of our defense partnership. We have conducted more than 170 joint military engagements in the past two years. As we work together on the current joint air policing mission, we mark the depth of our partnership which has provided U.S. military training and education for over 5,000 Bulgarian military officers and more than $50 million in United States investments to upgrade Bulgarian military facilities. Throughout our long history of friendship and military cooperation, our successes have proven time and again that we are safer and stronger when we act together