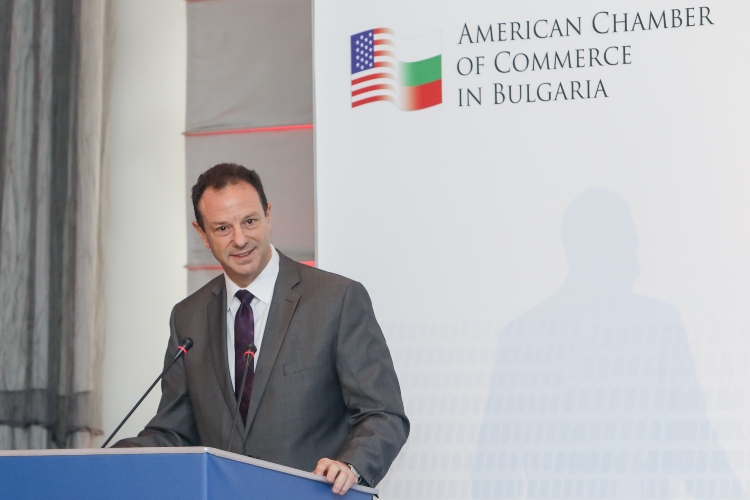 I have two words for us to think about as we gather this morning to celebrate our successes: vision and leadership.  Those two words helped bring us to this day and will serve to challenge us to do even more great things together.

First, Mr. Prime Minister, I want to thank you for your vision and leadership in bringing the United States and Bulgaria closer together – as security and economic partners.  Your government’s selection of the Lockheed Martin F-16 multi-role fighter airplane will bring our countries closer together as Lockheed Martin will be investing in Bulgaria and Bulgarians as part of this agreement.

Second, I want to congratulate AmCham for a very successful year.  We know that Bulgaria and the United States grow stronger together through business-to-business connections.  President Olivier Marquette, Executive Director Petar Ivanov, with the AmCham Board, your vision and leadership have made our AmCham a role model for other AmChams around the world.

What has that vision, that leadership, given us?  Billions of U.S. dollars invested in the Bulgarian economy.  Over thirty thousand Bulgarians with highly skilled, high paying jobs.

In the little over one year I have been in Bulgaria, I have had the pleasure of celebrating key achievements of Bulgarian-American businesses, made possible in part with AmCham’s support.

Coca-Cola inaugurated its expanded production facility in Kostinbrod in addition to establishing its 2nd largest global IT Center here in Sofia.

Equinix built a data center that is transforming Bulgaria into a digital hub of the region.

Kamenitza, which you may not know is partly American owned, opened a microbrewery for hand-crafted beers in Plovdiv.

That’s a lot to celebrate.  But Prime Minister Borissov, President Marquette, we should not stop there.  With vision and leadership, AmCham can do more.

At the Innostart Forum – in partnership with our Israeli friends – we heard how leading U.S. firms like Intel, IBM, Cisco, MassChallenge, Citibank, Coca Cola, Google, and Clemson University promote creativity and innovation.  With our vision and leadership, we can do more together to strengthen the innovation ecosystem here and unleash the creative potential of all Bulgarians to build new businesses and new jobs.

The America for Bulgaria Foundation invested more than $20 million dollars in Bulgaria this year to promote private sector development.  Soon, ABF will lead a delegation to the United States to encourage Bulgarian-Americans to invest in Bulgaria’s economy and society.  With our vision and leadership, we can do more together to build on Bulgaria’s welcoming business environment to bring more investment and more jobs.

I’m proud that U.S. companies set the standard for corporate social responsibility and giving back to their communities. U.S. companies in Bulgaria have invested millions of dollars in community centers, in environmental conservation, in education, and in healthcare. With our vision and leadership, we can do more to include and prepare the rising generation of workers for tomorrow’s jobs and build stronger communities and families here in Bulgaria.

We have much to be proud of.  With our vision and leadership, let’s do more together in the coming year.  Because we are stronger together.