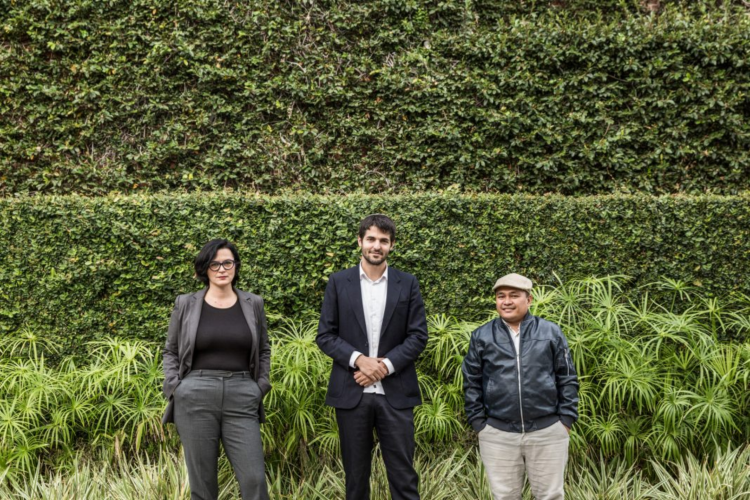 (From left) Maja Susha of Macedonia, Roie Ravitzky of Israel and Jeoffrey Baconga of the Philippines were among 26 visitors observing religion in the U.S. (© Emily Berl/State Dept.)

On a Sunday in mid-October, members of Washington’s interfaith community took part in the annual Unity Walk to celebrate solidarity among different faiths and cultures in the city. This year’s participants included 26 visitors from religious communities around the world who had come to the United States to see religious freedom in action. Among them were Jeoffrey Baconga from the Philippines, Maja Susha from Macedonia, and Roie Ravitzky from Israel.

“I saw a lot of people from all walks of life working together, embracing each other and having fellowship and camaraderie without trying to indoctrinate each other,” said Jeoffrey Baconga, a Christian pastor working in the southern Philippines. The Unity Walk included visits to a cathedral, a synagogue, a mosque, a Buddhist temple and other places where Americans practice their faiths in Washington.

It was “as if we belonged to one family,” Baconga said. “It made me believe that convergence is possible.”

The walk kicked off a two-week International Visitor Leadership Program in which Baconga and the other participants met with religious leaders and policymakers in Washington and then went to other U.S. cities. The program was an outgrowth of the State Department’s first-ever Ministerial to Advance Religious Freedom in July.

The freedom to worship according to one’s own conscience is a founding principle of the United States.  That freedom means that approximately 3,000 religions are represented in the U.S. — including Hinduism, Judaism, Buddhism, Islam, and many denominations of Christianity. Recent research shows the U.S. is the only wealthy country in which the majority of the population prays daily.

Maja Susha, who works with the Holocaust Fund of the Jews from Macedonia, said she was inspired by a meeting with an imam from a Northern Virginia Muslim group who spoke of his community’s outreach to the Christian and Jewish communities.

“These people from different religious backgrounds really want to collaborate with other faiths,” said Susha, who is one of an estimated 200 Jews in Macedonia. “I really hope that this kind of honest cooperation will one day come in my country.”

Alongside Eastern Orthodox Christianity and Islam — Macedonia’s two major religions — Judaism represents a tiny fraction of the religious population. “We have so much to do on the issue of collaborating among the religious communities,” Susha said.

Roie Ravitzky works at the Mosaica Center in Israel, which seeks to build peace between Israelis and Palestinians.

Ravitzky said he most valued the meetings with religious practitioners on the grass-roots level — in places such as Greensboro, North Carolina, where he spent four days. Along with its Protestant majority, Greensboro has significant congregations of Catholics, Jews and Muslims.

Ravitzky met religious leaders who deal every day with the challenges of leading a religious community in a diverse society.

“The people who do that while trying to achieve diversity and cooperation without trying to tie the hands of other religious people are inspiring to me,” he said.