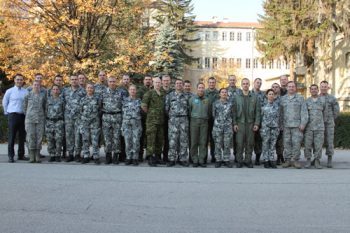 U.S. Air Forces in Europe led the IEAFA course, which started on Nov. 2, at the Bulgarian Military Command and Staff College facilities in Sofia. The students are from Bulgaria, Czech Republic, Estonia and Hungary, and include representatives from both the commissioned and non-commissioned officer corps.

The training program supports improved NATO coalition aviation operations with increased development for both combat and support forces.  The increased interaction at the junior officer and senior NCO level will dramatically increase and strengthen personal bonds of NATO airmen over time.  This will promote improved relations at all levels of Allied Air Forces and increase opportunities to find solutions to operational and common security problems.

According to IEAFA Commandant Lt Col Chris Erickson, this five-NATO nation training event has provided a valuable opportunity for the U.S. instructors to learn from Allied air force personnel.

IEAFA’s mission is to provide education and training to Air Force personnel from NATO and Partnership for Peace nations. IEAFA will offer the full Squadron Officer School and NCOA courses starting in 2016 at its permanent classrooms near Ramstein AB in Germany.