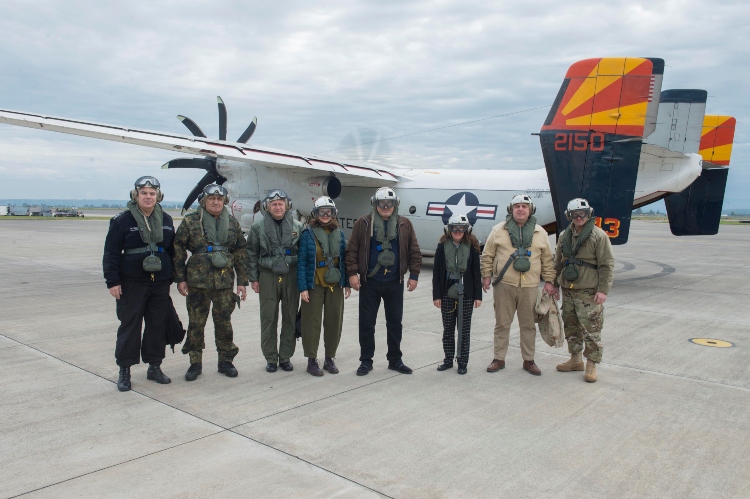 SIGONELLA, Sicily (Dec. 9, 2019) A delegation from Bulgaria poses for a photo prior to boarding a C-2A Greyhound onboard Naval Air Station (NAS) Sigonella during a scheduled visit, Dec. 9, 2019. NAS Sigonella’s strategic location enables U.S, allied, and partner nation forces to deploy and respond a

“This visit today to the USS [Harry S.] Truman with senior leaders from North Macedonia symbolizes the evolution of our partnership over the past two decades and is a fitting way to mark the country’s imminent entry into the NATO Alliance,” said Byrnes. “North Macedonia has been a strong and reliable partner since it first took part in the response to 9/11, and since that point our bilateral relationship has only continued to deepen and grow.”

The embark provided Foggo the opportunity to showcase the importance of the U.S. Navy’s presence in the Mediterranean and how naval operations in the region demonstrate the United States’ continued commitment to allies and partners.

“U.S. Navy presence is extremely important in the Mediterranean, especially with ongoing instability in the Middle East and North Africa and Russian activities in the Black Sea and Eastern Mediterranean,” said Foggo. “Our forces are able to support three different combatant commanders and three different continents in a very dynamic region – at the same time.”

The U.S. Navy is the only navy in the world with 11 aircraft carriers. Harry S. Truman (HST) demonstrated dynamic force employment and participated in various critical exercises and operations in fall of 2018, including operations above the Arctic Circle. In spring of 2019, USS Abraham Lincoln (CVN 72) and USS John C. Stennis (CVN 74) conducted two-carrier operations in the Mediterranean. These are only a couple of examples of how U.S. aircraft carriers are demonstrating capabilities in the European theater.

“Our naval forces provide us tremendous flexibility to project power at the time and place of our choosing,” said Foggo. “Our presence and continued partnership reflect our continued and unmoving commitment to our NATO allies and partners.”

The U.S. Navy’s strong ties in the region are amplified by the participation of allies and partners in U.S-led exercises, joint operations, and embarks such as today’s visit to Harry S. Truman.

“This year marks the 30th anniversary of the fall of the Berlin Wall and the 15th anniversary of Bulgaria’s membership in NATO,” said Mustafa. “[The] United States and Bulgaria have established a robust security relationship. The scope and pace of our military engagements with Bulgaria are steadily increasing, with 200 joint military engagements in 2019, including 19 U.S.-sponsored exercises.”

The United States’ regional allies and partners understand the significance and importance of ensuring freedom of navigation in international waterways and are committed to facing potential threats together.

“North Macedonia is situated in a vitally important location, in the center of the Balkan peninsula,” said Byrnes. “Furthermore, it understands the new types of threats that we face as an Alliance – including cyber warfare and the weaponization of disinformation to sow instability that crosses borders with ease and poses new and distinct challenges. North Macedonia will be a valuable addition to the Alliance not only for the skills that it brings, but also for its experience facing down these types of threats.”

The HST strike group last operated in the European theater in 2018, when it demonstrated the Navy’s ability to operate from the High North to the East Mediterranean. The HST Carrier Strike Group (CSG) conducted the largest aircraft carrier operations north of the Arctic Circle in nearly 30 years and participated in the largest NATO exercise since the Cold War, exercise Trident Juncture 2018.

“Our Navy is America’s away team,” said Foggo. “We help confront threats before they can reach our shores, we protect U.S. national interests and those of our allies, and we help maintain security and stability in the maritime domain so nations can freely use international waters for commerce and trade.”

The HST CSG is conducting operations in the U.S. 6th Fleet (C6F) to support maritime security operations in international waters alongside allies and partners.

CNE-CNA/C6F, headquartered in Naples, Italy, oversees joint and naval operations, often in concert with Allied, joint, and interagency partners, in order to advance U.S. national interests and security and stability in Europe and Africa.