By the middle of the 1700s, the thirteen colonies that made up part of England’s empire in the New World were finding it difficult to be ruled by a king 3 000 miles across the Atlantic Ocean.

Virginia took the first step forward independence by voting to set up a committee to represent the colonies. The First Continental Congress met in September of 1774. They drew up a list of grievances against the crown which became the first draft of a document that would formally separate the colonies from England. George Washington took command of the Continental Army, and began fighting the British in Massachusetts. For the next eight years, colonists fought fervently in the Revolutionary War.

In the meantime, a war of words was being waged in Philadelphia, Pennsylvania. On July 2, 1776, the Second Continental Congress presented a second draft of the list of grievances; and John Hancock, the president of the Second Continental Congress, was the first to sign. The document, called the Declaration of Independence, was treasonous against the crown; and the fifty-six men who signed it were in danger of being executed. 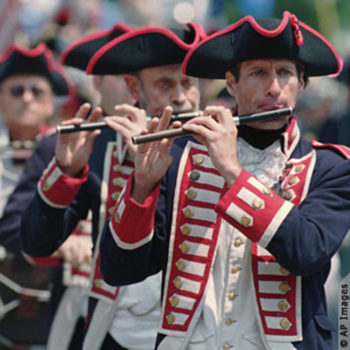 Independence Day is celebrated on July 4 because that is the day when the Continental Congress approved the Declaration of Independence. From July 8, 1776, until the next month, the document was read publicly and people celebrated whenever they heard it. The next year, in Philadelphia, bells rang and ships fired guns; candles and firecrackers were lighted. But the War of Independence dragged on until 1783, and in that year, Independence Day was made an official holiday.

Every July fourth, Americans have a holiday from work. Communities have a day-long picnics with favorite foods like hot-dogs, hamburgers, potato salad, baked beans, and all the fixings. The afternoon activities would not be complete without lively music, a friendly baseball game, three- legged races, and a pie-eating or watermelon-eating contests. Some cities have parades to the music of high school bands. At dusk, people in towns and cities gather to watch the fireworks display. Wherever Americans are around the globe, they will get together for a traditional 4th of July celebration!

The Declaration of Independence was first read in Philadelphia, Pennsylvania. Today, at the Freedom Festival at Independence Hall, costumed Americans re-enact historical scenes, and read the Declaration of Independence for the crowd. In Flagstaff, Arizona, American Indians hold a three-day pow-pow around the Fourth of July, with a rodeo and dancing. In Lititz, Pennsylvania, hundreds of candles that were made during the year are lighted in the park at night and floated the water while a “Queen of Candles” is chosen. The ship “U.S.S. John F.Kennedy” comes in full sail to Boston Harbor in Massachusetts on the Fourth of July, and the Boston Pops Orchestra plays a musical concert of patriotic songs, as more than 150 000 people watch fireworks burst over the water.