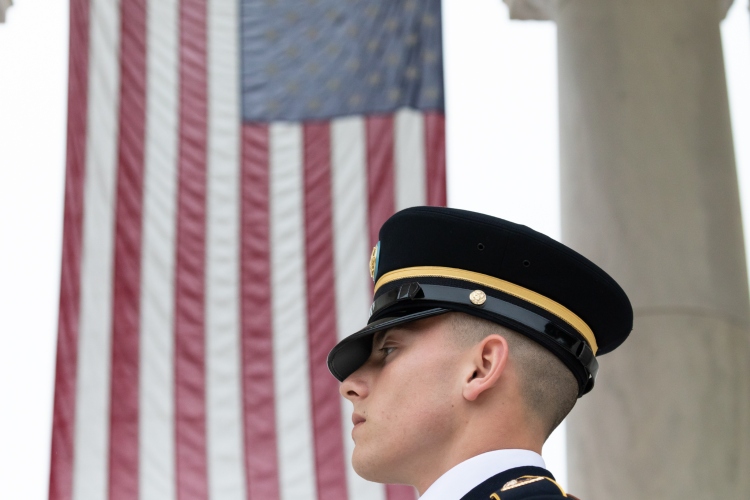 It was 1866, and the United States was recovering from the long and bloody Civil War between the North and South.

Henry Welles, a drugstore owner in Waterloo, New York, suggested that all the shops in town close for one day to honor the soldiers who were buried in the Waterloo cemetery. On the morning of May 5, the townspeople placed flowers, wreaths and crosses on the graves of the Northern soldiers in the cemetery. At about the same time, General Jonathan Logan planned another ceremony, this time for the soldiers who survived the war. He led the veterans through town to the cemetery to decorate their comrades’ graves with flags. It was not a happy celebration, but a memorial. The townspeople called it Decoration Day.

The two ceremonies were joined in 1868, and northern states commemorated the day on May 30. Children read poems and sang civil war songs, and veterans came to school wearing their medals and uniforms to tell students about the Civil War. Then the veterans marched through their home towns, followed by the townspeople to the cemetery. They decorated graves and took photographs of soldiers next to American flags. Rifles were shot in the air as a salute to the northern soldiers who had given their lives to keep the United States together.

In 1882, the name was changed to Memorial Day, and soldiers who had died in previous wars were honored as well. In the northern United States, it was designated a legal holiday. The southern states commemorated their war dead on different days. In 1971, along with other holidays, President Richard Nixon declared Memorial Day a national holiday on the last Monday in May.

Cities all around the United States hold their own ceremonies on the last Monday in May to pay respect to the men and women who have died in wars or in the service of their country.

Memorial Day is not limited to honor only those Americans from the armed forces. It is also a day for personal remembrance. Families and individuals honor the memories of their loved ones who have died.

Church services, visits to the cemetery, flowers on graves, or even silent tribute mark the day with dignity and solemnity.

Arlington National Cemetery in Virginia is the nation’s largest national cemetery. Not only are members of the armed forced buried here; astronauts, explorers and other distinguished Americans have all been honored with a special place here.

On Memorial Day, the President or Vice President of the United States gives a speech and lays a wreath on the tombs. Members of the armed forces shoot a rifle salute in the air. Veterans and families come to lay their own wreaths and say prayers. There is a chance that one of the soldiers buried here is a father, son, brother or friend.