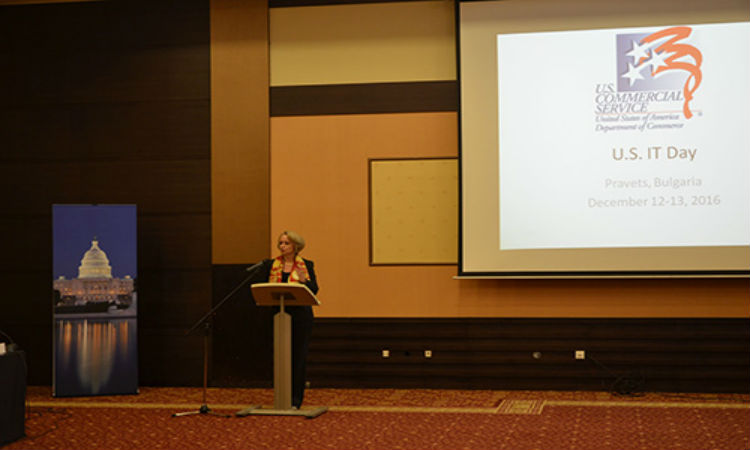 Nine leading U.S. IT companies presented e-government and cybersecurity solutions to 40 high-level Bulgarian government officials from 22 government agencies at U.S. IT Day, organized by the U.S. Embassy and U.S. Department of Commerce in Bulgaria on December 12-13th, 2016, in Pravets, Bulgaria.  The Pravets event was the latest in a series of major IT events organized by the U.S. Department of Commerce (USDOC) in Bulgaria, including two cybersecurity roundtables, one chaired by Deputy Undersecretary of International Trade at the Department of Commerce Ken Hyatt and the other chaired by one of USDOC’s Chief Information Officer,s Joe Paiva.  USDOC also organized a highly successful Southeast Europe regional Cybersecurity Trade Mission.

Cisco, Dell-EMC, F5 Networks, Fortinet, HPE, Microsoft, Oracle, Palo Alto and VMware shared their best practices in g-cloud, IoT, e-government solutions, modern frameworks for network security in government, and solutions for security and protection of information in data centers with officials from the newly established State e-Government Agency, the Council of Ministers, Ministry of Interior, Ministry of Defense, Ministry of Justice, Ministry of Transportation and ICT, Ministry of Education and Science, the Administration of the President, the State Agricultural Fund, the Competition Protection Commission, Bulgarian Air Traffic Services Authority, Sofia Airport, Sofia and Ruse Municipalities, the State Agency for National Security and others.  The U.S. IT companies’ representatives were from Bulgaria, Romania, Serbia, the Czech Republic, Poland and the United Kingdom.

One of the highlights of the event was the round table discussion, moderated by Ms. Dimitrova, during which Bulgarian government officials and company representatives discussed future cooperation and upcoming projects, and made plans for increased information sharing among government agencies and businesses. There are plans for follow-up events on specific topics such as cybersecurity solutions for the government cloud and using the Cloud as opposed to using data centers.