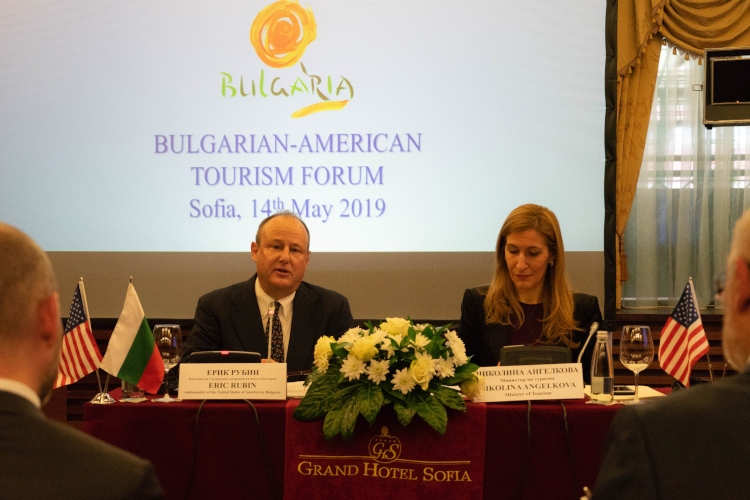 Thank you very much for the opportunity to speak here today.  I am very happy to see many tourism experts, professionals and distinguished hospitality industry representatives at this event. Bulgaria’s tourism industry plays a critical role in the country’s economy, prosperity and growth.

One of the key goals of this conference is to promote the United States as a tourist destination and present Bulgaria as an attractive and secure tourism market for American visitors. The Bulgarian government and the governments of Southeast Europe are actively encouraging investments in infrastructure and tourism markets development. These actions present a good opportunity for U.S. companies to increase sales and find a strategic foothold to grow in Europe.

In the U.S., the tourism sector typically generates over $1.6 trillion in economic output, supporting 7.8 million U.S. jobs. Travel and tourism exports accounted for 11 percent of all U.S. exports and nearly a third of all U.S. services exports. The United States is as diverse as destinations come and thus there’s no limit to what people can experience when they travel to or within America. Of course, tourists will always be drawn to buzzing metropolises such as New York City and Los Angeles. However, there’s so much more to see and do in between, not to mention the non-contiguous states of Alaska and Hawaii.

It is a pleasure for me to be here with all of you today joining the Ministry of Tourism’s experts in marking the fifth year since the authority was set up as a separate ministry in 2014. EU membership had a positive impact on Bulgaria’s tourism market, providing improved facilities, affordability, accessibility, and increased exposure. I have seen in my time here how the travel and tourism industry in Bulgaria, with its significant rural area and natural and historical potential, has rapidly developed with the joint efforts of the state, businesses, academia and local authorities.

I am proud to share that the U.S. Ambassador’s Fund for Cultural Preservation has restored a number of significant historical sites in Bulgaria in recent years, which enhance tourism opportunities and encourage associated development across the country. Last year we launched a new project to restore an ancient Thracian tomb near Sveshtari– a UNESCO World Heritage Site. We have also funded the preservation of Saint John Aliturgetos Church in Nessebar, two 4th century Christian tombs in central Sofia (currently at the National History Museum), and the 4th century BC Thracian Tomb of Kran II in the Valley of the Thracian Kings. Together these projects total more than US $1 million invested in Bulgarian cultural heritage by the United States Embassy.

I know that 2018 was a record year for tourism in Bulgaria, with more than eight million visitors coming to enjoy the country’s historical and ecological offerings. This included nearly 90,000 American tourists.  Revenue from foreign tourists coming to Bulgaria exceeded 3.2 billion Euro. This positive trend in visits to Bulgaria is attributed to renovated and new facilities, the reasonable costs of hotels and entertainment, and improved infrastructure. CNN prominently featured Bulgaria in its 60-second tourism promotions.

I am extremely delighted to see that the Ministry of Tourism and many U.S. companies are playing an active role in promoting Bulgaria’s tourism sector.

U.S. chains such as Holiday Inn and Best Western are present and have added new franchises over the last three years.  Ramada is also in two locations in Bulgaria. IHG/Intercontinental just opened last year a renovated luxury hotel in central Sofia, and the Marriott and Hyatt have highly anticipated openings in the coming months.

I was just in Plovdiv last month for the opening of the partly American-owned Pivovarna Kamenitza craft beer complex.  The project – with a USD 2.3 million investment from Molson Coors –created 40 jobs and is capable of hosting more than 300 guests when fully operational. From what I’ve seen, Pivovarnitza Kamenitza is a truly unique place.  It’s the first of its kind multifunctional complex in Bulgaria, combining a microbrewery for hand-crafted beers and a restaurant serving great food with an open stage for events. Its location, with its impressive architecture and entertainment opportunities, will further support the agenda of the Plovdiv 2019 Capital of Culture and promote Bulgaria as a preferred tourist destination!

My team at the U.S. Embassy in Sofia will continue to support the Ministry of Tourism and the tourism industry in their efforts to contribute to sustainable economic growth in Bulgaria. I am confident that this continued growth will, in turn, make a difference in placing Bulgaria as one of the best tourist destinations of the region.