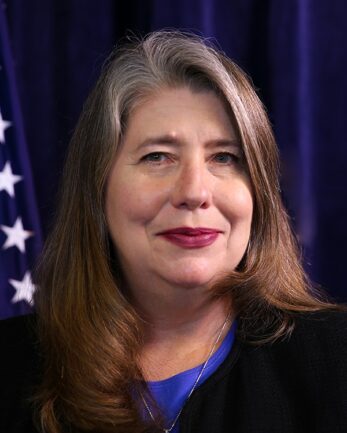 Andrea Brouillette-Rodriguez assumed her duties as Deputy Chief of Mission in Sofia on June 30, 2021.  Previously, she served as Deputy Chief of Mission at the U.S. Embassy in Ashgabat, Turkmenistan.  Ms. Brouillette-Rodriguez joined the Foreign Service in 1996 and her previous overseas tours include Political/Economic Counselor in Dhaka, Bangladesh; Deputy Political Counselor in Moscow, Russia; Political Counselor in Tegucigalpa, Honduras; Political/Economic Chief in Milan, Italy; Human Rights Officer and Assistant Public Affairs officer in Havana, Cuba; and tours in Copenhagen, Denmark and Buenos Aires, Argentina.  In Washington, she has served as the Political Counselor at the U.S. Mission to the Organization of American States; the El Salvador desk officer; on the Board of Examiners, which administers the entrance exam to prospective employees; and in the State Department’s Operations Center.

She holds a M.A. in Latin American Studies from Tulane University, and a B.S. in Political Science from Barry University. She speaks fluent Spanish in addition to Bulgarian, Russian, and some Italian and Danish. She is married with two grown daughters.