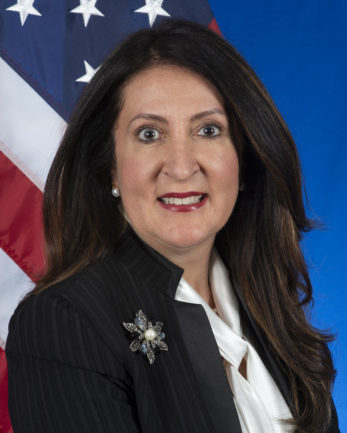 Herro Mustafa, a career member of the Senior Foreign Service, was confirmed by the U.S. Senate as Ambassador to the Republic of Bulgaria on September 26, 2019.  Previously, she was the Deputy Chief of Mission at the U.S. Embassy in Lisbon, Portugal, where she also served as Chargé d’Affaires for the first seven months of the Trump Administration.

A career member of the Foreign Service, Ambassador Mustafa worked in the Office of the Vice President from 2009-2011, providing counsel on issues related to the Middle East and South and Central Asia.  Earlier Washington assignments included Deputy Director of the Afghanistan Office; Advisor on the Middle East in the Office of the Under Secretary for Political Affairs; Director for Iran, Israeli-Palestinian Affairs, and Jordan at the National Security Council (NSC); and NSC Director for Iraq and Afghanistan.

Her overseas diplomatic postings were as the Political Minister Counselor at Embassy New Delhi, India; the lead U.S. Civilian Coordinator in Mosul, Iraq; a Consular Officer in Beirut, Lebanon; and a Political Officer in Athens, Greece.  Prior to joining the State Department, Ambassador Mustafa was an International Elections Supervisor with the OSCE in Bosnia.  She is the recipient of notable awards from the State Department, including the Matilda W. Sinclaire Award for superior achievement in a foreign language.  She speaks Portuguese, Arabic, Hindi, Russian, Greek, among other languages, and is studying Bulgarian.

Ambassador Mustafa grew up in Minot, North Dakota and her family story is the subject of the documentary film American Herro.  She has an undergraduate degree from Georgetown’s School of Foreign Service and a Masters from Princeton University.  She is married and has two children.