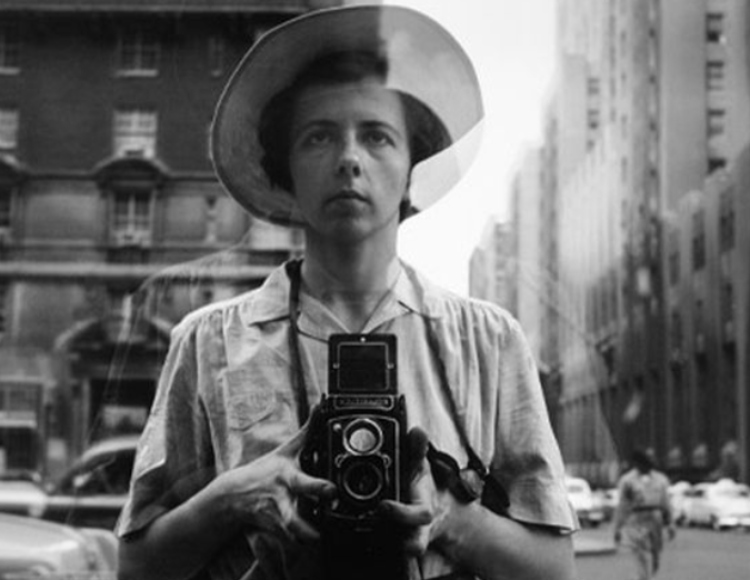 Masters of Photography – Vivian Maier “In her own hands” (April 23 – June 2, 2019) is organized by MUSIZ Foundation in partnership with Sofia Municipality, U.S. Embassy in Sofia, VIVACOM and Samsung. The exhibition is in collaboration with diChroma photography, Maloof Collection and Howard Greenberg Gallery, NY.

Her precarious social position led her to lead a silent and solitary life, without sound or fury. Hers is a life that cannot be told; a transparent life, as if her body without a shadow had the mere appearance of life; life with a certain resignation, the “resignation that alleviates all ills without cure”; surviving without really existing.

By happy coincidence, another side of this “Woman without a Shadow”(2) and her contradictions, which no one had ever glimpsed, was discovered in Chicago, in 2007. This other facet of her, as if freed of its shackles, produced a considerable body of work.

This imposing, dense, luminous and brilliant oeuvre is made up of more than 120,000 photographic images, Super 8 and 16mm films, various recordings, a rattlebag of photographs, and reems of undeveloped film, like captivating finds. Haunted by this passion, which became certainty, she now ranks among the most emblematic of street photographers, with a place in the history of photography alongside Diane Arbus, Robert Frank, Helen Levitt and Garry Winogrand.

We see the same themes returning again and again throughout her work, like weighting that balances out the overall architecture of her work; a vocabulary, a syntax and a language laid down from the outset and her earliest images. This was her language and she used it to tell the story of her time.

She photographed street scenes, her preferred stage, and the working-class districts where she came into contact with life; portrait after portrait of strangers and people with whom she identified and gave a split second of eternity as her gaze briefly met theirs; a gesture, an expression, a situation; the grace of small things within reach. She also photographed the world of children, a universe that had been her own for so long. A world of freedom where time no longer exists; forms, rhythms, materials, like objects found on her long walks; in black and white, and then in colour from the 1960s onwards, adding a variation the musicality of colours – and playing on its attributes. She tried her hand at making films on Super 8 and 16mm cameras, no longer wishing to hurry time forward but to ground it to a halt, frozen in the instant of what she saw; because rather than scenes, Vivian Maier filmed the movement of her eye in space, scouting the photographic image. Vivian Maier “seized upon the life that was everywhere she looked. She grasped it in its smallest details; she observed it and followed it; she awaited it at the crossroads where it lingered; she overtook it as it ran, and wherever she may have been, she found it in all places equally great, equally powerful and overwhelming.”

But central to these themes is an important issue that would seem to carry the work’s entire structure: her search for identity through self-portraits. Many such portraits exist in Vivian Maier’s work, in multiple variations and types, to become a language within language – the mise en abyme of the double. The recurrent mode of her self-portraits, now a form of signature, is the cast shadow, which typically cleaves to the body, a negative body double, “carved in reality” and able to make the absent present. For although it testifies to the existence of a referent, it simultaneously obliterates its presence. Through duality, Vivian Maier plays with this self on the verge of disappearance and the advent of its double, acknowledging the self-portrait as “a presence in the third person (that) accurately reveals the simultaneity of this presence and absence”.

Vivian Maier’s work, discovered in extremis, destined as it probably was to be “disfigured” or even to disappear, unfolds before our eyes, and this “simple nanny”, nameless and faceless, reaches the point at which she posthumously becomes Vivian Maier. Vivian Maier, photographer. Her work, lifelike and vibrant, resonates in some way with everyone who has ever looked at one of her images. Time stops instantly. Vivian Maier stands before us and forever etches herself in eternity.