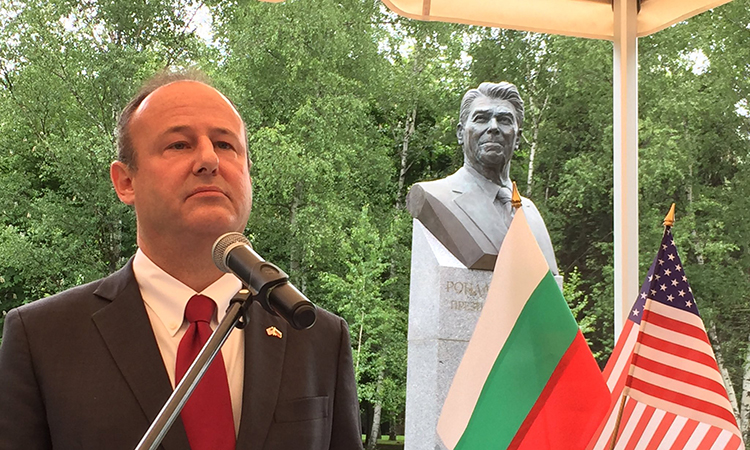 I am honored to be here to represent the United States Government and President Trump at the dedication of this beautiful statue of President Ronald Reagan.

For so many people in this part of the world, President Reagan represented more than just his country and his Administration.

First of all, he represented America, and America’s commitment to ending the postwar division of Europe, thereby ending the Cold War standoff that consigned millions of people, among them the people of Bulgaria, to dictatorship and tyranny.

But more importantly, President Reagan represented hope and faith and optimism.  At a time when many had given up on the possibility of restoring democracy and freedom to Eastern Europe, President Reagan insisted that it was not only possible, but inevitable.  President Reagan saw and understood the flaws in the Communist system of one-party dictatorial rule.  He knew that the peoples ruled by this system wanted and deserved better.  That in fact they had a right to something better, to rejoin the world and to live as free people.  To vote, to travel, to worship as they wished.

And so when President Reagan ignored many of his advisors and declared “Mr. Gorbachev, tear down this wall,” his words echoed across the entire Soviet-dominated empire.  It would only be a few years before the impact of his belief in the possibility of freedom played out in the dramatic events we witnessed at the end of the 1980s.

Bulgarians must study, assess and come to terms with their history without interference from outsiders.  But it is essential that they know how strong the commitment to their freedom was among so many millions of Americans for so many decades.  President Reagan symbolizes that commitment, and the sacrifice of tens of thousands of American lives to advance the cause of freedom and democracy during the Cold War.

Bulgaria is a proud member of the European Union and NATO today.  The United States and Bulgaria are joined in a solemn alliance that commits us to defend each other in time of danger.  We are part of a community of shared values, based on the belief that human freedom is more powerful than any political system.  And based on the belief that only by standing together in defense of the idea of One Europe, Whole, Free and At Peace can our societies achieve their most profound aspirations.  And that only by building societies based on respect for the individual, respect for diversity, tolerance of others and the key principles of freedom of speech, freedom of assembly, freedom of worship and freedom to choose one’s leaders can we all be truly free.

I salute sculptor Boris Borisov for this remarkable and beautiful likeness of President Reagan.  This statue will stand here in South Park as a reminder of America’s support for Bulgaria’s freedom, independence and security, and of the role that President Reagan played in making today’s reality possible.

In closing, I would like to quote from President Reagan’s farewell address in 1988, in which he summed up his view of the world and the causes to which he had committed himself for so many years.  President Reagan stated:

As long as we remember our first principles and believe in ourselves, the future will always be ours. And something else we learned: Once you begin a great movement, there’s no telling where it will end. We meant to change a nation, and instead, we changed a world.

I’ve spoken of my vision of the “shining city upon a hill” all my political life, but I don’t know if I ever quite communicated what I saw when I said it. But in my mind it was a tall, proud city built on rocks stronger than oceans, windswept, God-blessed, and teeming with people of all kinds living in harmony and peace; a city with free ports that hummed with commerce and creativity….open to anyone with the will and the heart to get here. That’s how I saw it, and see it still.

Let us rededicate ourselves as Americans and Bulgarians to that vision.  A vision of faith and harmony and partnership and openness.  Let us be true to those values and those goals.  Let us take our Alliance and our friendship to a higher level.  And let us remember those who came before us who made it possible.

Thank you for letting me share this moving and important event with you today.