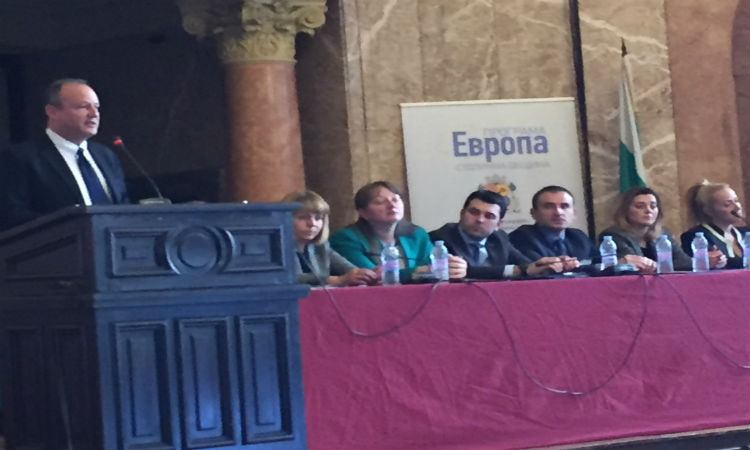 Good morning.  Thank you for inviting me to join in conversation about this important and current topic.

First, I wish to recognize the leadership of Mayor Fandakova, Deputy Mayor Chobanov, and the Sofia City Administration for their support of tolerance and inclusion.  They are leading instrumental government efforts to advocate for tolerance in Bulgarian society, particularly among the young.  Under their leadership Sofia schools instituted pilot projects teaching children the concepts of tolerance and diversity acceptance.

I recall several other examples of leadership on this issue by Mayor Fandakova and the Administration – such as museum projects highlighting diversity and tolerance, and a hosted event at City Hall for American speaker Christian Picciolini – a former member of neo-nazi groups, who explained why he eventually rejected hate and embraced diversity.

I was very pleased to receive an invitation to this forum.

In particular, I’m heartened that Bulgarian civil society envisioned this forum, and brought it to fruition.  The relevance and organization of this forum demonstrates that civil society is alive and active in Bulgaria, and Bulgarian citizens have the opportunity to become involved with effective organizations working to improve the lives of all Bulgarians and the laws governing Bulgarians.  So I also offer appreciation to Marginalia, Shalom, and the Internet Society of Bulgaria.

A few moments ago I mentioned pilot projects in Sofia schools to teach children the concepts of tolerance and diversity acceptance.  Schools are exactly the place to start.  Children learn what they observe and hear.  Tolerance starts early; unfortunately, intolerance starts early too.  Our task, as a global society, is to ensure each child experiences tolerance of their ethnicity, religion, and background.  Additionally, each child must receive the message that all people deserve the same respect.  While we are privileged to live in free societies, where freedom of speech is integral, it is important that those exercising freedom of speech remain aware that hateful and toxic words, even when protected by the law, undermine national unity and strength.

Today’s forum gathers, among others, Bulgarian academics, lawyers, government representatives, civil society actors, and media representatives.  You are here to discuss some of the most pressing issues facing not just Bulgaria, not just the EU, not just the Western world – issues facing our global community.  But as we’ve all heard – think globally, act locally.  Looking around today, I see a broad gathering of voices willing to parse through the issues on today’s agenda –

– just to name a few.  Easy answers and exact solutions are hard to come by; however, the conversations in search of those goals are worthy in themselves.  We move forward step-by-step by participating in Forums such as this, and continuing to exchange ideas.  And when it comes down to it, we move forward by standing shoulder-to-shoulder in solidarity.

Bulgaria has a history of tolerance worthy of emulation.

A history that evokes national pride and international respect.  Bulgaria’s history of tolerance and inclusivity, as well as more recent progress, should not be distorted by those who seek to divide Bulgarians along racial, political, and social divides.

And let us be clear: we must reject efforts to glorify dark chapters of history, or to lionize historical figures who were purveyors of hate and intolerance.  In seeking to learn positive lessons from history, it is essential not to allow the wrong lessons to be adopted as examples.

Today’s forum, each participant, and all the civil society groups represented here, are holding the line against the threat of escalating intolerance in Bulgaria.  In closing, I would like to thank each participant here today.  Your presence, your activism, and your voice, make a difference.  Thank you.