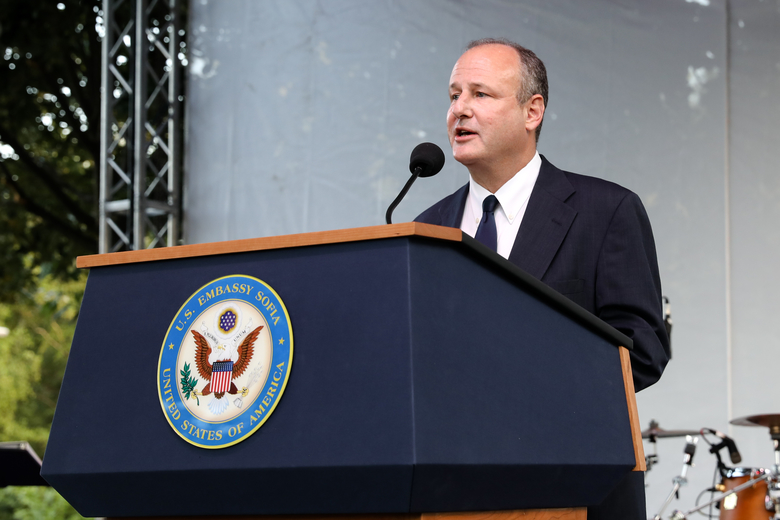 Thank you for coming tonight.  I’d like to start with a heartfelt thank-you to the many sponsors who made this evening possible.  Their names are on the banners near the embassy entrance.

And thank you for coming to celebrate the 243rd anniversary of the independence of the United States of America.

Nicole and I are celebrating our fourth Independence Day here in Sofia.  It has been a great three and a half years, and we have done so much together.  Nicole and I have traveled to nearly every corner of Bulgaria, and we have come to love this country and its people.  Also its natural beauty and its amazing hospitality.

And we have made progress in nearly every aspect of US-BG relations.  I leave with the satisfaction of knowing that the work we have done together will continue.

America’s commitment to Bulgaria is long and deep.  It goes back to the early 19th Century, when Americans supported Bulgaria’s independence in word and in deed.  The American College of Sofia has roots dating back to the school’s founding in Plovdiv in 1860, and remains our flagship institution to this day, educating some of the best and brightest Bulgarian students for a future of success and service.

America’s support for Bulgaria’s struggle for independence goes back to that time as well, and continued through Woodrow Wilson’s insistence on Bulgaria’s survival after the First World War, and through our unceasing dedication to Bulgaria’s return to freedom and democracy through the darkest days of the Cold War.

As we mark the 30th anniversary of Bulgaria’s return to democracy this autumn, let us take stock of the progress we have achieved together in building Bulgaria’s thriving free-market economy and in supporting Bulgaria’s accession to NATO and the European Union.  Bulgaria’s young people today are freer and have more opportunities than any generation in Bulgarian history.  That achievement did not come easily, and should not be underestimated.

For me, the highest priority has been to build our trade and investment relationship to help create more good jobs at good wages for young Bulgarians, so they can stay here or come back from overseas to build their lives, their families and their country.

As NATO allies, we have seen unprecedented cooperation, training and investment.  And Bulgaria is poised to take a giant step forward toward military modernization, with the acquisition of modern, NATO-compatible equipment to match the superb caliber of Bulgaria’s military personnel.

On energy, we have seen consistent progress toward diversification, with the launch of the interconnector with Greece, the first purchase of American liquefied natural gas, and the first steps toward market pricing of energy.

Our people to people ties have never been stronger.  This year, another 6,000 young Bulgarians will join the more than 100,000 who have spent a summer working in the United States and traveling around our country.  And we have taken a big step, together with the Bulgarian government, to expand our Fulbright academic exchanges to more participants.

I am especially proud of our public information efforts, including our campaign entitled “The Power is In You,” which I think most of you have seen.  We have just launched the latest chapter, which is entitled “Masa.”  The most important message is that the United States believes in the future and the potential of our ally and friend Bulgaria, and in the Bulgarian people.  This is from the heart.

It will not be easy for Nicole and me to say goodbye, but I promise we will be back soon.  Bulgaria is in our hearts, and our friendships here will endure.

Long live the alliance, friendship and partnership between our two countries.

Thank you again for coming.  Have a wonderful evening.