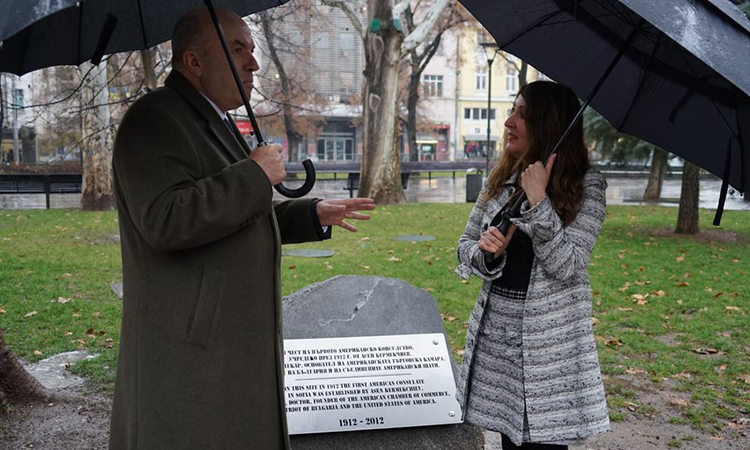 Ambassador Mustafa and Minister Milkov marked the 120-year anniversary at a memorial to Asen Kermekchiev, known as Ace Kermek. He opened U.S.’s first Consular Agency in Bulgaria on this day in 1912.

Join us in celebrating the 120th anniversary of U.S. – Bulgarian diplomatic relations this year! Relations between Bulgaria and the United States were first formally established in 1903, and on January 12, 1912, the United States opened our first U.S. Consular Agency in Bulgaria. To mark the occasion Ambassador Mustafa met with Foreign Minister Milkov at the memorial honoring Bulgarian Asen Kermekchiev (also known as Ace Kermek) who was the first American Consular Agent in Bulgaria. Kermekchiev was a prominent Bulgarian businessman, physician, and journalist. He represented the U.S. government even while working as a field doctor for Bulgaria in the First Balkan War and was praised for protecting American lives and property while at the front. He founded the first American Chamber of Commerce in Sofia. U.S. Ambassador James Warlick unveiled the plaque dedicated to Kermek in 2012, marking the 100th anniversary of the opening of the Consular Agency. #USBG120