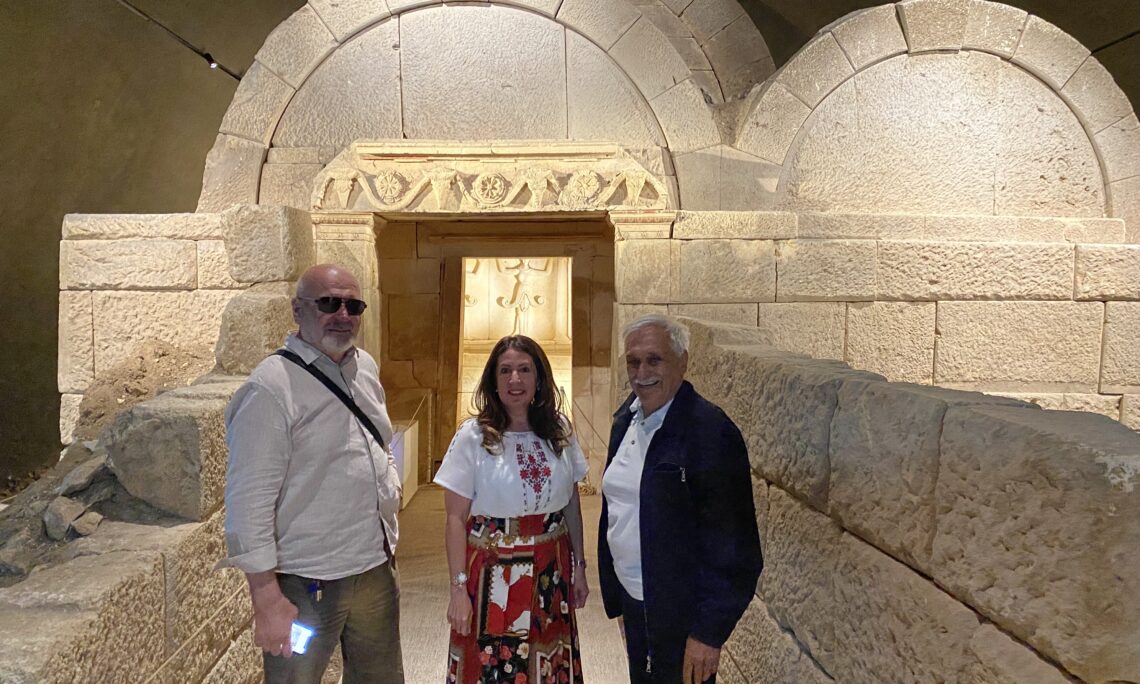 On June 7, Ambassador Mustafa joined the Credo Bonum Foundation, Ministry of Culture, and local dignitaries in unveiling the newly renovated Thracian Tomb near Sveshtari. The renovations were made possible by the U.S. Ambassadors Fund for Cultural Preservation (AFCP), which provided over 330,000 BGN to preserve this UNESCO-designated cultural treasure for future generations to enjoy and admire.

The Sveshtari Thracian Tomb is a unique example of Mediterranean sepulchral architecture and attracts approximately 50,000 visitors every year. The tomb was built in the 3rd century BC to house the remains of a wealthy Getae tribe ruler who was buried there along with his horses. The most notable decorations inside the tomb surround the burial chamber – 10 caryatids (columns sculpted as women) whose chitons are in the shape of an upside down palmette. This kind of sculpture is otherwise unseen in the region.

The AFCP-sponsored restoration project included expert repair and renovation of significant parts of the display of the tomb, as well as professional light installations, climate control, educational exhibits and displays, and other improved tourist infrastructure.

Established by the U.S. Congress in the fall of 2000, the U.S. Ambassadors Fund for Cultural Preservation awards grants for the preservation of cultural sites, cultural objects and collections, and forms of traditional cultural expression such as music, dance, and language, in more than 130 countries around the world. Administered by the Cultural Heritage Center, within the Department of State’s Bureau of Educational and Cultural Affairs, and funded from Diplomatic and Consular Program funds, AFCP offers the U.S. a meaningful opportunity to show its respect for the cultural heritage of other countries.

Ambassador Mustafa stated at the event: “The United States knows how vitally important it is to help preserve these sites and Bulgaria’s cultural heritage for future generations and we are honored to be your partners in this vital effort. . . . May our project serve as a tangible reminder of the enduring partnership between Bulgarians and Americans, who came together to protect a vital piece of Bulgarian history in its time of need.”