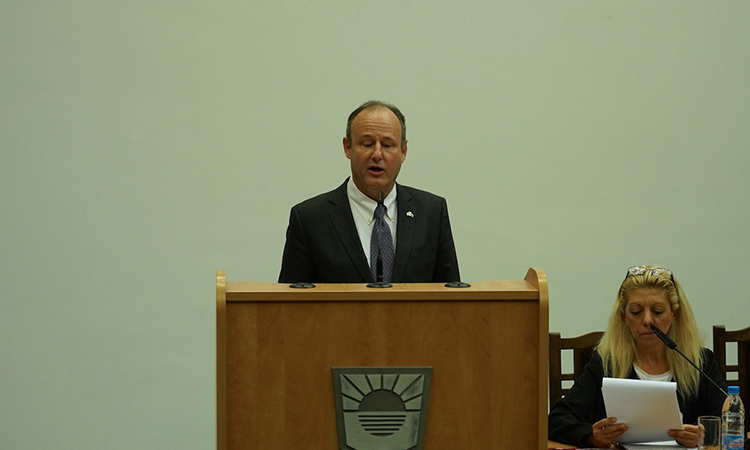 U.S. Ambassador Eric Rubin spoke today at Burgas Free University, stressing ties between Bulgaria and the U.S., and reminiscing about his first experience in Bulgaria 25 years ago.

“I am optimistic about Bulgaria’s future.  I first came here in 1992, a time that your professors and parents will remember as being full of hope and promise for a young, democratic Bulgaria…  There are reasons to be optimistic in Bulgaria today.  Those reasons are all around us in the inspiring people who make Bulgaria great.”

Ambassador Rubin noted that despite being a “newer” university Burgas Free University has established itself as one of Bulgaria’s best, with cooperation agreements with universities around the world, including America’s University of Tennessee, Eastern Michigan University, the University of San Antonio in Texas, and Georgetown University.  “These types of partnerships yield positive results for our countries, as students and faculty from both the U.S. and Bulgaria learn from each other and cooperate in solving some of our societies’ toughest problems. They also create lasting bonds between our countries that only grow stronger over time.”

Ambassador Rubin also stressed values like tolerance, freedom, and rule of law, quoting new U.S. Depart of State Assistant Secretary for European Affairs Wess Mitchell that those values are “the glue of a common civilization, a civilization that is united by bonds of memory, culture and shared sacrifice.”

Ambassador Rubin stated, “We are proud today to stand arm-in-arm with Bulgaria, our close ally and partner for so many years.  We are proud of the progress that Bulgaria has made in areas like human rights, democratic development and economic progress.  And, with Bulgaria’s European Council presidency next year, we admire your commitment to a peaceful, prosperous EU – a Europe whole, free, and at peace.