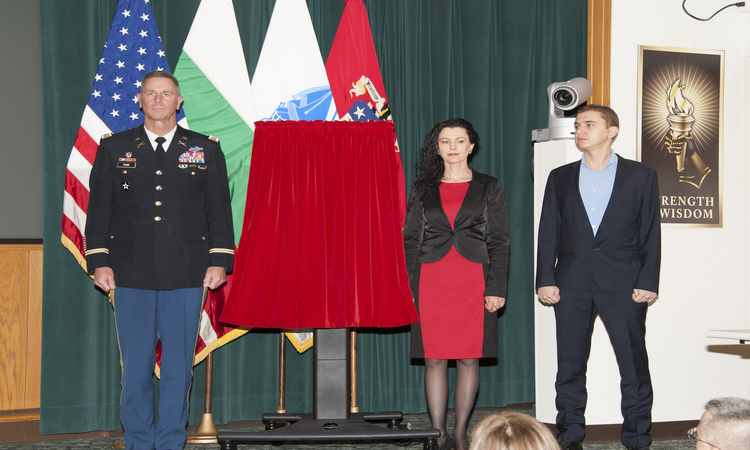 In addition to the Bulgarian Defense Attaché, Brigadier General  Tsanko Stoykov, tributes to this great strategic leader and friend of the United States Army flowed in from former classmates and comrades to include Tennessee Adjutant General Max Haston who wrote, ” Nick was a close friend as we essentially grew up in the State Partnership Program together over the past 20 years.  He was a good counterpart and mentor and did a tremendous amount to enhance Bulgaria and Tennessee’s relationship.  His absence is felt deeply here in Tennessee and throughout the entire State Partnership Program enterprise.”  Former seminar mate, retired Brigadier General Steve Salazar said, “I deeply regret I was not be able to attend today’s ceremony. My thanks to the USAWC for honoring my seminar mate – he was a good man, a great Soldier, husband, father and friend and never without his infectious smile.”

Major General Nenov’s widow, Despa, and son Stanimir represented the late general and were visible moved by ceremony.  Most of the attending family and friends had traveled from Bulgaria just to make this event.  Major General Nenov’s son, Stanimir gave an outstanding acceptance speech on behalf of his father, outlining his father’s five keys to success and how they have guided him to this day.  After the presentations were complete, the Nenov’s were treated to a richly deserved standing ovation and Major General Nenov’s portrait was positioned in a place of honor reserved for the most recent inductee to take his place among the other 58 members of the United States Army War College’s International Fellows Hall of Fame.