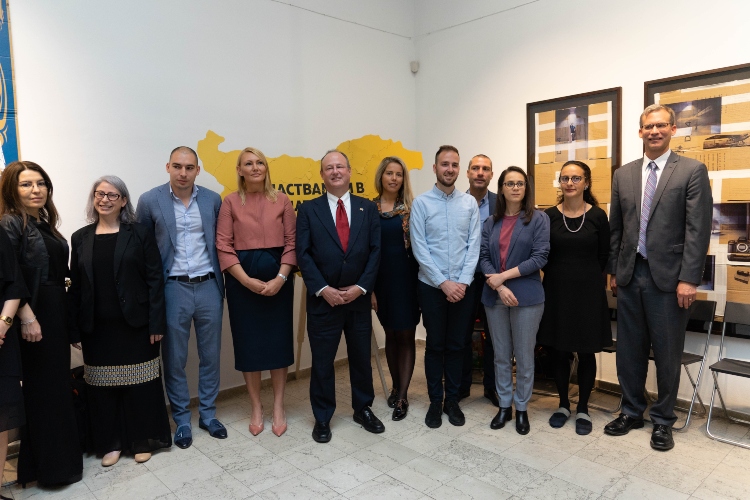 Today the U.S. Embassy in Sofia launched the 4th chapter of its ‘The Power Is In You’ campaign.  The newest chapter, Table, showcases four uniquely Bulgarian organizations that provide a real-life examples of initiatives begun by Bulgarian citizens.

Ambassador Eric Rubin described the campaign history. “Almost two years ago we began a campaign to bring attention to all the Bulgarians who are working to bring change and development to their country.  Bulgarians are actively building economic growth, prosperity, and stability for a strong Bulgaria – we see it daily in our work.  ‘The Power Is In You’ salutes Bulgarians actively helping to build Bulgaria’s future and, we hope, inspires all Bulgarians.”

“In 2017 we launched the first chapter of ‘The Power Is In You’- Chovek.   Remember Rositsa?  A Bulgarian commercial pilot showing her daughter the power of hard work and education. Chovek highlights the accomplishments of average Bulgarians.”

“In 2018 we introduced chapter 2 ‘You Are More Than You Think.’  We profiled Bulgarians who are successful internationally.  Professor Pimpirev, who you may remember we streamed on video from Antarctica during our last launch event, is still making Bulgaria proud as a lead researcher at the South Pole.”

“Earlier this year we opened chapter 3 – DANO.  We profiled Bulgarians who have succeeded by relying on action rather than hope.  As part of that chapter, citizens built a playground for their children and kept Bulgarian parks and beaches clean.”

“Today we introduce the 4th chapter of ‘The Power Is In You’– Table.  Masa is both the word for table and also for a critical mass.  This chapter gathers all segments of Bulgarian society around a shared symbolic table.  That’s a very common sight here – friends and family gathered around a table discussing what’s on their minds.  This series highlights those who stand up and move to take action.”

The four Bulgarian initiatives the U.S. Embassy is highlighting are: