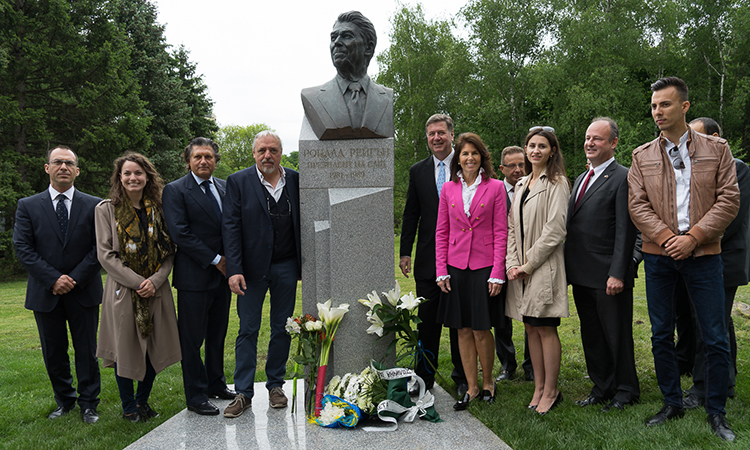 On May 10, 2017 Ambassador Rubin accompanied Bulgarian and U.S. dignitaries at the unveiling of the bust of President Ronald Reagan, the 40th U.S. President, in Sofia’s South Park alley, which was named after Reagan in 2011. The idea for the monument emerged several years ago as an expression of gratitude by many Bulgarians who credit President Reagan with the collapse of the USSR and totalitarianism in Bulgaria. In his remarks at the unveiling ceremony organized by the Ronald Reagan Monument Initiative Committee in Bulgaria, Ambassador Rubin stated: “President Reagan represented America, and America’s commitment to ending the postwar division of Europe, thereby ending the Cold War standoff that consigned millions of people, among them the people of Bulgaria, to dictatorship and tyranny. But more importantly, President Reagan represented hope and faith and optimism. At a time when many had given up on the possibility of restoring democracy and freedom to Eastern Europe, President Reagan insisted that it was not only possible, but inevitable. President Reagan saw and understood the flaws in the Communist system of one-party dictatorial rule. He knew that the peoples ruled by this system wanted and deserved better. That in fact they had a right to something better, to rejoin the world and to live as free people. To vote, to travel, to worship as they wished.”