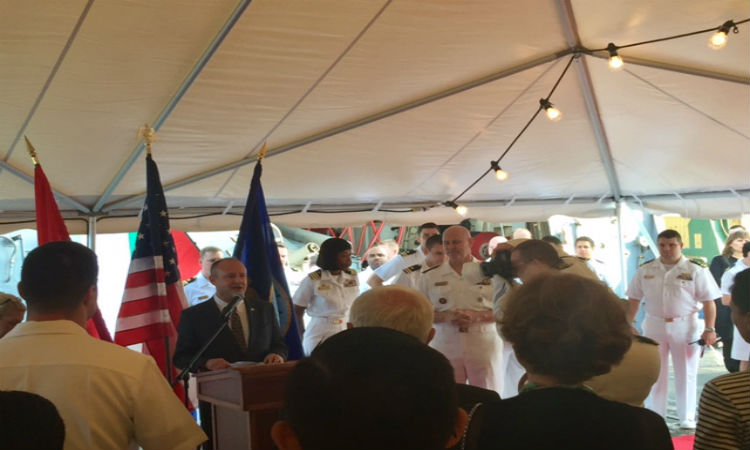 Last night the U.S. Navy and the Commander of the U.S. 6th Fleet, Vice-Admiral (VADM) Christopher Grady hosted a reception aboard the USS Oscar Austin during its port visit in Varna. Honorable guests included Ambassador Rubin, Deputy Defense Minister Atanas Zapryanov and Bulgarian Navy commander RADM Petev.  VADM Grady and Amb. Rubin once again reiterated the significance of military cooperation between the navies of allied nations for the security of the region. Bulgarian dignitaries, naval officers and non-commissioned staff took a tour of the ship and enjoyed the opportunity to meet their American counterparts.

Meet the first female-only leadership of a U.S. Navy warship. CDR (капитан II ранг) Janice Smith and CDR Samantha Dutily are visiting the Port of Varna for the first time onboard USS Oscar Austin this week. This morning CDR Smith spoke to the Bulgarian media about the ship’s operations in the Black Sea and training with the Bulgarian Navy. Following the press conference, the media were given a tour of the ship. In addition, following a visit by American sailors to the Nikola Vaptsarov Naval Academy earlier in the week, Bulgarian cadets were invited for lunch and a tour of USS Oscar Austin.