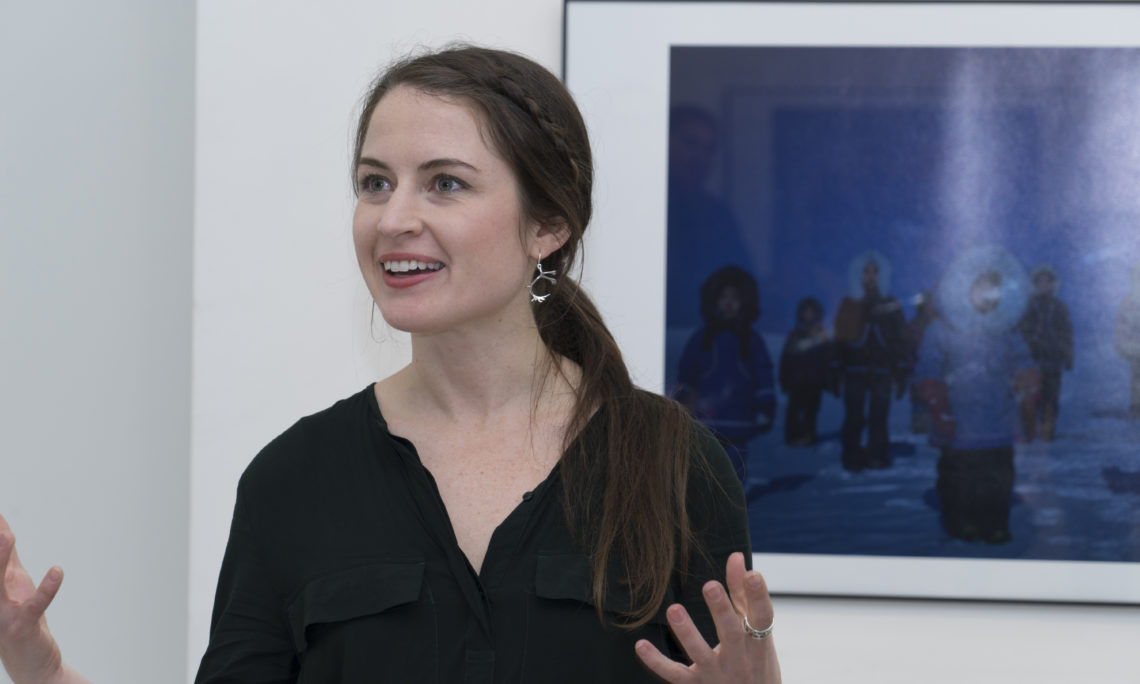 The photo exhibit “Polaris” by Alaskan-born artist Acacia Johnson will be on display at Synthesis Gallery in Sofia (55 Vasil Levski Blvd., Sofia) through 16th October. Traversing remote landscapes in Alaska, Iceland, Greenland and Nunavut, Acacia Johnson seeks moments that seem to fall away from reality around the edges, into another realm. The official opening of the show took place on 3th October and we seized the occasion to ask Acacia a few specific questions about her undergraduate education in U.S. and her general approach to photography. The exhibit is organized by BG Press Photo Foundation with the support of the U.S. Embassy in Bulgaria.

You studied photography at Rhode Island School of Design. Could you share with us something about the program there?

Acacia: Yes. I did a Bachelor of Fine Arts in photography there. I came in as a transfer student, so I missed the first year, when you can take courses in all kinds of design to figure out what you want to focus on. But I came in straight to photography and I basically took only photography classes for three and a half years. It was very intense, really hard, but it was the best education I could possibly have gotten. My professors were so amazing! They saw that I have this vision and they will actually let me go on these trips to take pictures and come back, as long as I produced something. So they gave me a lot of freedom and a lot of knowledge, both technical and also almost like philosophical in a way. I cannot imagine having a better education than that.

Was there any particular reason you chose this university? It is far away from your home state of Alaska.

Acacia: It is. I had a lot of contacts who do media, arts, culture and, from my perspective that I had in my world, [Rhode Island School of Design] appeared to me to be the best one in the United States for what I exactly wanted to do, the kind of photography that I wanted to do. So I decided it is either that one or nothing. I applied to nine schools for marine biology and one school for art and that was it. And I got it.

Apart from being a professional photographer, you are also a tour guide for polar regions. Is that another passion of yours or is it a way to make a living?

Acacia: Yes, both of them. Of course, travelling to the polar regions is quite difficult and very expensive, so if you could find a way to get paid to be there all the time, that’s amazing. I don’t make very much money out of photography to be realistic, and so, to be able to keep things going year round, I work there maybe eight months in the year – in the Arctic, Svalbard, Greenland, the Canadian Arctic and then, in the winter, in Antarctica. And I love it because I am so passionate and excited about the polar regions and in that job I get to show people first hand literally take them there: This is what you are seeing; This is why it is important; This is why it is magical…I also teach people to use their cameras in that place. So it is amazing. A lot of people buy a camera for a first time for that trip, so I help them through the learning steps.

These are very extreme places. Do you have special training with surviving there?

Well, to some extend I grew up to have a very adventurous lifestyle in Alaska, so I have a little bit of a clue. I have been through some courses like emergency medicine – what to do when somethings go wrong, long mountaineering courses – how to live in the snow, how to live on a glacier… But it was not until I went to the Canadian Arctic that I really learned how to deal with the cold! When we go on these trips it is in the summer, Arctic summer, so it is not deeply cold.  But most of my photographic projects were shot in the winter.

Is your approach to photography a rather scientific one or the opposite – you follow your artist intuition?

Acacia: When I started photography, I started purely with this poetic, artistic vision that was purely from my own imagination. But the further I go and the more time I actually spend – also I work with a lot of professional biologist, historians, climatologists, so the longer I spend in polar regions I realize that the photos are connected to all of these other things… But recently, my focus became more and more anthropological. The people – very different people, who live and spent time in the polar regions, that you might not expect. So I am using photography now more than anything to investigate these different relationships that these really different people have to these really wild places.